Wan Ahmad Fayshal, who is the former aide to Syed Saddiq, expressed regret that the former Youth and Sports Minister had called for a press conference on May 31 under the name of “Armada Bersatu Malaysia”.

“Syed Saddiq is free to move with any other registered organisation he chooses,” he said yesterday.

“However, he has no right to use the name Armada or Bersatu for any purpose, especially in his continuous attempts to interfere in party matters and spew various allegations.”

It was reported that a group of 236 Bersatu Youth members had urged the party’s leadership to hold an emergency general meeting to allow party delegates to vote on several issues plaguing Bersatu.

Led by Syed Saddiq, a former Armada leader whose party membership was withdrawn under controversial circumstances on May 28, the group had urged for the party grassroots to be allowed to make decisions for the party.

Wan Ahmad Fayhsal, the deputy Youth and Sports Minister, reiterated that Bersatu secretary-general Datuk Seri Hamzah Zainuddin had explained in detail that the membership of Syed Saddiq, along with four others including former chairman Tun Dr Mahathir Mohamad, were automatically terminated through their own action which was against the party’s constitution.

“Syed Saddiq is no longer the Armada chief,” he said.

“It is also important to stress that the party’s top leadership, as the highest executive body outside of the general assembly, divisions, including the respective Armada and Srikandi wings, have expressed full support towards the leadership of party president and acting chairman Tan Sri Muhyiddin Yassin,” he added.

“The current Bersatu leadership which is loyal will not allow any party to threaten this big family.

“The move made by Muhyiddin was to strengthen and stabilise the position of Bersatu and the government,” said Wan Ahmad Fayhsal, who is contesting for the post of Bersatu Youth chief at the party’s inaugural polls. 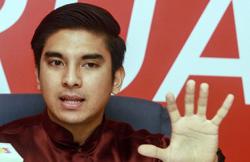 Now, Syed Saddiq to be hauled up by Bukit Aman