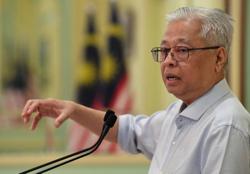 The Senior Minister (Security) said the sending back process will start with Indonesian citizens on June 6.

"All Indonesian illegal immigrants will undergo Covid-19 testing via the Rapid Test Kit Antigen (RTK Antigen) method first in the presence of officials from the Indonesian embassy before being sent back.

"The first phase, which starts on June 6, will involve 2,189 Indonesians, who are currently being detained at immigration depots in Peninsular Malaysia and Sarawak, as well as 672 at depots in Sabah," he told reporters during the daily briefing on Saturday (May 30).

From the total number of Indonesians involved, the first group will consist of 450 people that will be sent back via three flights to Jakarta, Medan, and Surabaya on June 6, followed by 445 people on June 10 to the same three destinations, he added.

Ismail Sabri said phase two will involve 2,623 people that will be sent back within two months.

"Indonesian embassy officials will also be allowed to conduct consular visits to the depots to finalise travel documents.

"On behalf of the Malaysian government, I would like to thank the Indonesian government for their cooperation in this matter," he said.

"The Cambodian embassy has also expressed their willingness to assist in the deportation of 67 of their citizens.

"We hope other countries will come forward and cooperate with the deportation of their citizens, who are being held at depots nationwide," Ismail Sabri said.

So far, a total of 4,807 undocumented immigrants who are placed at immigration depots in Bukit Jalil, Semenyih and KLIA, as well as Immigration Department personnel, have undergone Covid-19 screenings.

"A total of 385 tested positive, including an Immigration personnel at the Semenyih depot, while 37 others are still waiting for results.

"Those who tested positive are sent to the quarantine centre at MAEPS, Serdang. So far, 26 illegal immigrants have been discharged and in the process of being sent back," Ismail Sabri said.