KUALA KUBU BARU: A trader, who rammed his truck into bystanders at the Pekan Bukit Sentosa hawker area in Hulu Selangor two days before Hari Raya, has been charged with attempted murder.

Kang Ming Han, 32, believed to be drunk during the incident, pleaded not guilty at a Sessions Court yesterday to charges of attempted murder and disorderly conduct at a police station.

The charges were read out to him before judge Nurul Mardhiah Mohammed Redza.

Kang is alleged to have attempted to murder Abdul Rashid, 42, Mahadin Senan, 41, and Baharum Ab Manaf, 61, by ramming his truck into them and injuring them at a night market site in Pekan Bukit Sentosa, Hulu Selangor on May 22.

The charge, under Section 307 of the Penal Code, provides for a jail term of up to 20 years and a fine upon conviction.

He was also charged with disorderly conduct by uttering harsh words to a policeman, Shahidan Abdul Khalil, 32, who was on duty at the Bukit Sentosa police station, Hulu Selangor on the same date, under Section 90 of the Police Act, which provides for a maximum fine of RM500 or up to six months’ jail or both upon conviction.

Deputy Public Prosecutor Ahmad Zuhaini Muhamad Amin suggested a RM30,000 bail because the case went viral and involved crashing into people which led to their injuries.

“The accused is also being investigated under the Road Transport Act and subject to police investigation,” he said.

Lawyer Muhammad Adhwa Azhar, who was representing the accused, pleaded for a lower bail, saying his client did not have a criminal record.

The court allowed bail of RM20,000 in one surety for both charges and set July 1 for mention of the case for document submission.

A video had gone viral on social media showing a man ramming his truck into hawker stalls and bystanders at the hawker site in Pekan Bukit Sentosa. — Bernama 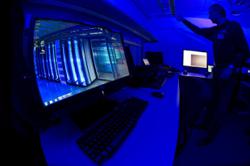