PETALING JAYA: Veteran journalist Datuk Ahmad A. Talib died due to liver cancer at 5.42pm on Tuesday (May 26) at the University Malaya Medical Centre (UMMC).

Ahmad started his career as a cadet reporter at the national news agency Bernama, before joining NSTP and working his way up the ladder.

He had a column with the NST called Kurang Manis that first appeared in August 1995, then a column later called Pahit Manis in the Sunday edition of the daily.

He continued contributing to the paper even after his retirement, his last piece on May 3 was on how the movement control order (MCO) was the best time to reflect on life.

“So stop moaning and groaning about the MCO. Use it to reflect on family values, targets, plan careers and bond tightly. You may never get another chance,” he had written.

"We travelled together to many countries as journalists to cover the visits of then PM Tun Dr Mahathir Mohamad.

"He was a seasoned newsman with the skills to pose sharp questions to many politicians but always in a non-condescending manner.

"He will be remembered by those of us from his generation of journalists."

Wong, 59, said Ahmad always understood the pulse of the nation.

He had the sentiments of the people and carried their voices in his column, Wong added.

Ahmad's daughter Sophia Ahmad said in a post on Facebook that his body would be brought to the Al Muqarrobin mosque in Bandar Tasik Selatan for prayers.

The solat jenazah, she said, would be conducted at the same venue.

"God willing, the body of the deceased will be buried today. Hopefully, those who know him will say Al Fatihah for him, may Allah bless and love his soul,” said the post.

Meanwhile, Sophia when contacted by Bernama, said her father was diagnosed with liver cancer about a month ago, while receiving treatment at a private hospital.

"Then he was admitted to UMMC on the first day of Syawal, before his death today. The deceased will be buried at the Muslim cemetery in Sungai Besi,” said Sophia, a Berita Harian reporter.

He is survived by his wife, Datin Nur Shima Daud, 66, and four children and a granddaughter. 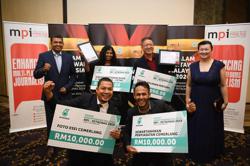