Mother died trying to save her sons in Raya fire tragedy

KOTA KINABALU: The mother who perished with her four sons in a tragic fire on Hari Raya Aidilfitri, had died trying to save her sons.

Aishah Awang Jumat, 58, apparently ran back into the burning house and rushed up to the upper floor of their wooden house to alert her four sleeping sons.

Sadly, Aishah and all four of her sons who had been sleeping – Dzulkarnain Othman, 34, Dzulnisham, 27, Rozaini, 26 and Rosdi, 24 – died in the 2am blaze on Sunday (May 24) that razed their house in Kg Binsuluk, Membakut.

Membakut community development officer Abdul Kadir Jalani said that the mother was believed to have saved herself at first but headed up to the room of her children before getting caught in the fire herself.

“At this point, it is hard to say what really happened, but based on what some of the family members said, Aishah had gone to alert her sons, ” he said when contacted Monday (May 25).

Aishah and her four sons died in the fire while four others – her husband Othman Ali, 64, a daughter-in-law Awrita Saidul, 27, and two other sons Zulkifli Othman, 29, and Dzulaika Othman, 25, survived.

Zulkifli and Dzulaika suffered burns and are being treated at the Beaufort Hospital.

Kadir said that the father and some of the others who survived were able to escape as they were sleeping at the lower floor of the house when the fire broke out.

According to him, the double-storey wooden house was connected to the main electricity grid and their family was planning to start a homestay.

Sabah Fire and Rescue Department director Kamarulzaman Malik Abdullah said that a forensic investigation is underway and he declined to speculate on the possible cause of the fire amid talk that it started in the kitchen.

Firemen found four bodies in the general area of the razed house around 4am while the fifth body was found at 7.10am.

According to relatives, Othman who was sleeping in the ground floor room, was awakened by his wife’s screams asking them to leave the house after the fire broke out. She was believed to be in the kitchen and preparing food for the first day of the Hari Raya celebrations.

Prior to the incident, Othman was sleeping in his room-cum-office.

Othman and other family members tried to put out the fire but it spread too rapidly through the house. 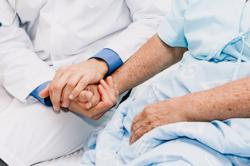 Father and son doctors who treated patients die from Covid-19