Safe to use: Dr Hoe points out that general usage of an alcohol-based sanitiser will not cause a person’s hands to burn when ignited.

Universiti Malaya public health medicine specialist Prof Dr Victor Hoe said there was danger if such sanitisers were not used according to recommendations.

He pointed out that using these sanitisers alone would not cause a person’s hands to burn when ignited.

“The amount that we use for cleaning our hands is minimal, and it would have evaporated after a short period of time, ” he said.

He noted that sanitisers should not be used near an open flame such as in the kitchen.

“If you need to be near an open flame, use a tissue paper to dry your hands first, ” he said when commenting on claims on social media that sanitiser bottles kept in the car could explode.

Dr Hoe clarified that sanitiser bottles “may explode” if the temperature in the car hits 82°C.

The boiling point for 70% isopropyl alcohol is 82°C. The alcohol content of hand sanitisers sold in the market ranges from 60% to 75%.

Dr Hoe added that the chances of a person’s hands catching fire after using a hand sanitiser while using the fuel pump were also “very small”.

“To reduce the risk, wipe your hands with a tissue before handling the pump. Do not use alcohol-based hand sanitiser next to the fuel pump, ” he said, adding that sanitisers were unsuitable for face cleaning and definitely not for consumption.

“Use hand moisturisers if the hands are too dry, ” he said.

He added that frequent washing with soap and water could also result in dermatitis.

“Hand sanitisers are very safe unless people put them in fire either by accident or intentionally, ” he said.

Dr Zainal believed that hand sanitisers were safe to be kept it in the car or used at a petrol station after handling the fuel pump.

For proper storage, he urged the public to keep them away from extreme temperatures or direct fire.

In its risks and hazards assessment for alcohol-based sanitisers, the World Health Organisation (WHO) noted that all alcohol-based products were “potentially flammable”, thus, should be stored away from high temperatures and flames.

Despite the risks, WHO said the benefits of the alcohol in terms of infection prevention “far outweigh the fire risks”. 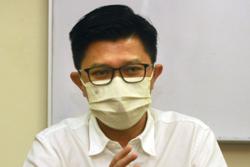