Bistros allowed to reopen in Miri, but no entertainment allowed

MIRI: Sarawak has given the green light for bistros (restaurant that has a bar) to reopen, but Miri City Council has barred any form of entertainment in such premises.

Miri Mayor Adam Yii said only food and drinks can be served.

"The green light given by the state to reopen bistros for business does not mean that full-scale operations like before is allowed.

"Our Miri City Council has decided to continue imposing a ban on entertainment like stage shows, karaoke and live bands.

"There must be no entertainment or group performances on stage. Bistros will be strictly controlled.

"They can serve food and drinks only," he told the press here Friday (May 22).

Yii said the operating hours for bistros will be from 7am to 10pm only.

Customers must have their temperature recorded and they must sit according to the specified social distancing rules, he said.

The operator of bistros are compelled to disinfect their premises before and after operation hours everyday, he added.

Yii reminded the public that the reopening of bistros does not mean that everything is back to normal.

He said that Covid-19 remains a threat and cause for concern even in Miri, which has been declared a green zone.

Miri Hospital saw two deaths and about two dozen infections from Covid-19 during the past two months. 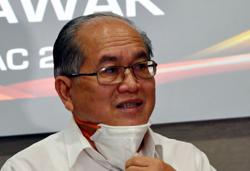