To Karen, with love

Family ties: Chapman with her mother Patricia and brother Malcolm.

PETALING JAYA: The Star Media Group (SMG) has lost one of its most dedicated editors.

Karen Josephine Patricia Chapman, 49, who has been with The Star for over two decades, passed away yesterday after a two-month battle with pneumonia.

Chapman started with the company in 1999 as a journalist before working her way up to Education Editor in 2014 – a position she held until her passing.

Chapman, from Kuching, holds an honours degree in History from the Victoria University of Wellington in New Zealand.

She graduated in 1994 and started her career in journalism the following year.

Her brother Malcolm said Karen loved her job and journalism.

“Mum and I will miss her dearly but we take comfort in knowing she had lived a full life and accomplished the things she set out to do.”

Expressing his sympathies to her family, friends and The Star, Transport Minister Datuk Seri Dr Wee Ka Siong said he had known her since his days with the Education Ministry.

“She was so young. She left us too soon,” Dr Wee, who was the former deputy Education Minister, said.

He added that Chapman was very dedicated and passionate about education issues.

“Karen had always given her all in every story she wrote and to the StarEdu pullout she managed. She was always professional but, above all, a generous friend.”

Science, Technology and Innovation Ministry secretary-general Datuk Dr Siti Hamisah Tapsir, who had known Chapman for over five years, considered her a friend.

“She was very professional, very helpful and thoughtful in reporting the news, especially on higher education. I am going to miss her friendship,” said Siti Hamisah, who is the former Higher Education director-general.

“There were so many good things about her. She was a good person – dedicated and attentive.”

National Union of Teaching Profession (NUTP) secretary-general Harry Tan said Chapman had given her all to support and improve the country’s education system.

“She drove her team to greater heights – The Star’s education pullout is second to none,” he said, adding that her demise was heartbreaking but the work she left behind was “beyond par excellence”.

“She was a very professional reporter with great integrity.

“She would always ask for statistics and data to back up whatever statements that were issued,” said Lok, who is also the former NUTP secretary-general.

Her passing was a great loss to the media fraternity and to journalism, she added.

“I had known her for decades – since she started her career in reporting.

“Karen was highly regarded as a person who had a deep passion and dedication for her work and for education.

“She carried on her duties with a strong commitment.

“She set the benchmark for reporting – especially on education matters, and we will miss her dearly.”

Goh said Chapman was most well informed about education issues, and the “go-to person” if anyone had a query.

“If any of her colleagues needed help or a contact number, she was quick and generous with help. As a person, she was warm, kind, humble, soft-spoken and hardworking.”

“She was serious, responsible, reliable and knew her stuff. Indeed, she earned her stripes as Education Editor with her years of experience and knowledge in the field.”

Sunway Education Group chief executive officer Elizabeth Lee not only worked with Chapman on a professional level, she also bonded with her on a personal level.

“On Teachers Day I wish to pay tribute to a true educationist who had a deep appreciation of the state and play of education in Malaysia.

“I knew her first as the ever diligent journalist, who never cared for the time nor day nor public holiday to follow up on news about education.

“She featured stories with a heart because that’s just her, all heart,” said Lee.

Having worked with Chapman closely over the past 14 years as the Newspaper-in-Education editor, Sharon Ovinis saw a side to Chapman that was almost always private – one that placed the importance of family values above all else.

“Karen was close to her family and had a soft spot for her friends’ and colleagues’ children. Her interest was always genuine.”

A wake will be held at the Paul Miki Room, Church of St Francis Xavier, Jalan Gasing, Section 10, Petaling Jaya, from 11am to 4.30pm today.

A private prayer session will be held between 3pm and 3.30pm.

Bereavement contributions can be made to Malcolm George William Chapman (Maybank account no. 164397933755). 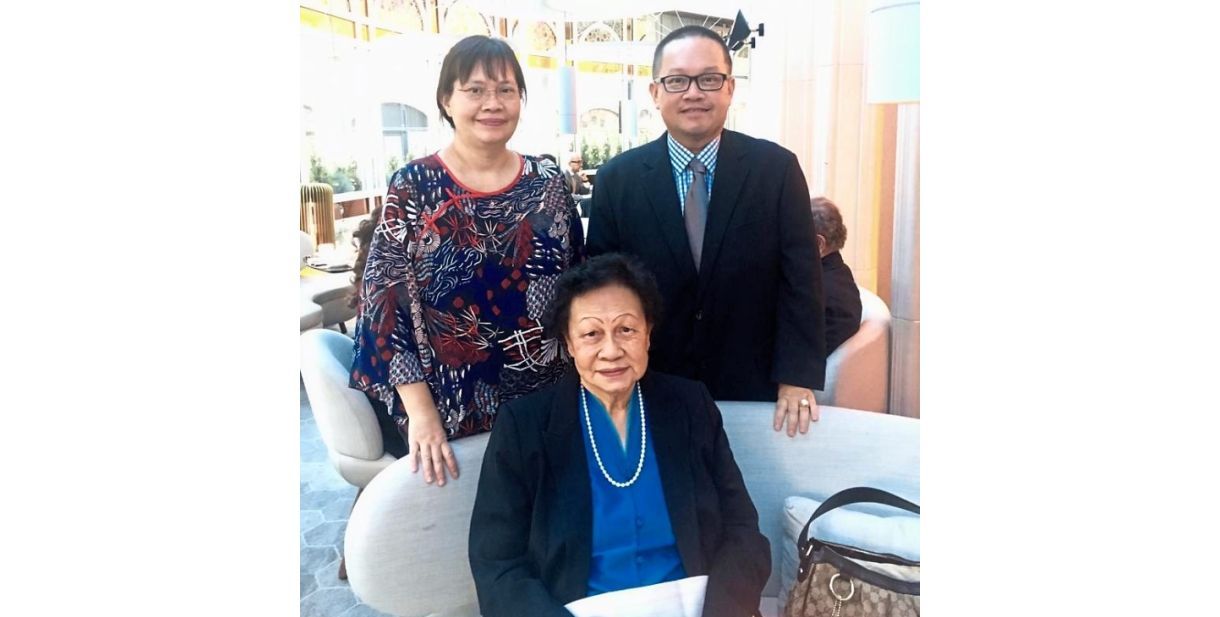 Family ties: Chapman with her mother Patricia and brother Malcolm.