Conditional MCO: Those entering country via Johor must still be quarantined, says MB

ISKANDAR PUTERI: Malaysians and foreigners entering the country via Johor will still need to be quarantined even under the conditional movement control order (MCO).

Mentri Besar Datuk Hasni Mohammad said that the state fully supported the conditional MCO but it has to ensure border security.

“Malaysians as well as foreigners coming back into the country would still need to be quarantined at centres that the state government had provided.

“We have enough centres to accommodate those returning from overseas,” he said during a press conference at Kota Iskandar here on Monday (May 4).

He added that this was also applied to those returning from Sabah and Sarawak despite being no flights from East Malaysia into Johor.

Hasni was replying to a report by an English daily that foreign travellers, with the exception of diplomats, permanent residents and expatriate pass holders working in essential services sectors, were still barred from entering Malaysia despite the relaxation of regulations with the implementation of the conditional MCO beginning Monday.

The daily reported that this was confirmed in a brief guideline by the National Security Council (NSC) following Prime Minister Tan Sri Muhyiddin Yassin's announcement on Friday (May 1) of the revised standard operating procedure (SOP) under the conditional MCO.

Meanwhile, Hasni also said the state government would allow most businesses to reopen with conditions.

“We fully support the conditional MCO as we have met the various criteria such as having adequate healthcare and security services.

“However, the full compliance will depend on how the respective local councils in the state implement it,” he added.

Hasni, who is Benut assemblyman, said that the respective local councils would come up with its SOP based on its capabilities. 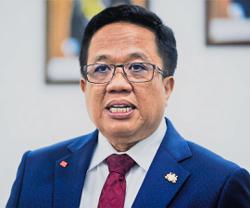 Go to the ground to help traders, councils told