PETALING JAYA: The government is committed to ensuring press freedom in the country, says Datuk Saifuddin Abdullah (pic) in his address for World Press Freedom Day 2020.

The Communications and Multimedia Minister said press freedom must, however, run in line with the principles of truth and justice.

“In the era of information technology of the 21 st century, the media does not only have the role of disseminating transparent information, but also protecting society from false news that can threaten the stability and harmony of the country, ” he said.

He added that he was happy with Malaysia’s achievement in climbing up 22 places on the Reporters Without Borders’ (RSF) 2020 World Press Freedom index.

“However we need to strive to not only rank higher in international index, but more importantly to have the press in a participatory role with other stakeholders in the country such as the government, businesses, civil societies, and other nation builders, ” he said.

Saifuddin expressed his gratitude to the journalists in the country, saying they were the main source for news that was up to date and factual.

“It is our duty to uphold freedom for the press to do their job well while holding on to the principles and ethics of journalism, ” he added. 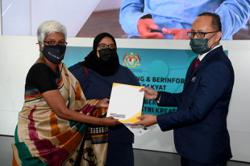