By CLARISSA CHUNG and R. SEKARAN

Caring for the needs of NGOs

PETALING JAYA: Business owners laud the government’s move to gradually re-open the economy, readying themselves for the new normal of flexible working arrangements.

Malaysian Employers Federation executive director Datuk Shamsuddin Bardan (pic) said the business community welcomed the decision to allow most sectors of the economy to resume, though he said some employees would continue working from home.

“More companies are now adept at implementing work-from-home arrangements, and that appears to be the norm going forward.

“However there are matters that still needed to be addressed, such as cybersecurity concerns, ” he said.

Shamsuddin said the security aspects of video conferencing need to be considered, while there are also concerns over the sharing of confidential material over personal laptops which may not have robust encryption or protection systems.

Both employers and employees, he added, must also figure out ways to enhance productivity while working from home.

“There are many challenges that can arise while working from home, including being exposed to a lot of distractions.

“For employees, they should dedicate a small space in their house where they can sit and do their work, ” he said, adding that both sides must build up enough trust so that employees can work remotely without constant monitoring from their supervisors.

On alternate work days and flexible work hours, Shamsuddin said such practices are part of the new normal that needs to be accepted.

“We may not be able to follow all the suggested practices but it is important to have more flexibility.

“What is important is that the government has allowed the economy to open up and for businesses to start, ” he said.

Under the conditional movement control order period, Prime Minister Tan Sri Muhyiddin Yassin encouraged employers to look into flexible work arrangements as some parents do not have access to babysitters while kindergartens and schools remain closed. In Penang, most manufacturers are supportive of flexi-hour schedules and alternate work-from-home days for parents.

Federation of Malaysian Manufacturers (FMM) welcomed these moves as they keep roads from being congested at rush hour, while helping working parents care for young children.

“Many can still work from home now because there is a global lockdown and demand for production has been reduced. But later, there should be a gradual re-opening of preschools and primary schools because parents will eventually have to get into office, ” he said. 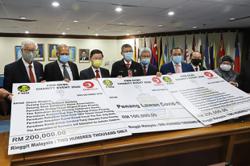 Caring for the needs of NGOs