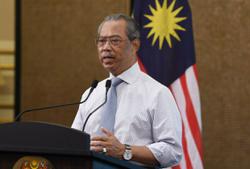 According to Shafie, they had also given the green light for Petronas to begin operations at offshore locations.

According to Shafie, a senior Petronas official had made the request for the operations of Samur in Sipitang to restart, and the state Cabinet yesterday approved the request, as well as for resumption of operations at SOGT in Kimanis.

“They are allowed to work as usual, ” he told reporters after meeting with China’s expert consultant team on Covid-19 which was on the final leg of its Malaysian visit to share experiences in handling the pandemic in China.

On growing calls to let all workshops, tyre shops, hardware, electronic and electrical outlets to operate, and not just a few selected business outlets, Shafie said the state government was looking into the matter.

“We will be looking into the detailed part of it, ” he said when asked if the state government was considering allowing all shops to operate without special permits similar to what was being done by the Federal Government in the fourth phase of the movement control order.

“We don’t want the business sector to suffer. We have to work with the private sector, ” he said, adding that the Sabah Covid-19 Command Centre had been asked to look into the matter sector by sector.

Asked about allowing two members from a household to travel in one car as the Federal Government had done, Shafie said Sabah would study the decision and decide whether to follow suit.

He said the three red zones – Tawau, Kota Kinabalu and Lahad Datu – had become yellow zones and there were still many districts that were green zones.

“We are now working with the private sector to restart the economy, ” he said.

He also said that Sabah would adopt the new ruling by the federal government allowing two people from a household to go out together during the movement control order (MCO).