Painting the town blue in a show of gratitude, support for healthcare workers, frontliners in global initiative

Kuala Lumpur's landmarks such as the Petronas Twin Towers, Kuala Lumpur Tower and Tun Razak Exchange lighted up in blue as a sign of support to frontliners working tirelessly throughout the MCO period, April 30, 2020. GLENN GUAN/The Star

PETALING JAYA: The cityscape transformed into a beacon of bright blue to show gratitude and support to healthcare workers, frontliners and other essential workers in the global #LightItBlue initiative.

In Kuala Lumpur, the entire facade of the KL Tower was lit in bright blue at about 10pm Thursday (April 30).

Part of the Exchange 106 skyscraper - the tallest building in South-East Asia (at 492m) - was also lighted up in blue at about 9pm. Joining the movement were Istana Negara, Petronas Twin Towers, Menara DBKL, the Saloma Link, Dataran Merdeka, Masjid Jamek and the blue pool of the River of Life project at Sungai Klang, where these structures were also suitably decked out in electric blue as night fell.

In Putrajaya, the Seri Saujana and Seri Wawasan main bridges were among the six bridges illuminated in blue lights at 9pm. 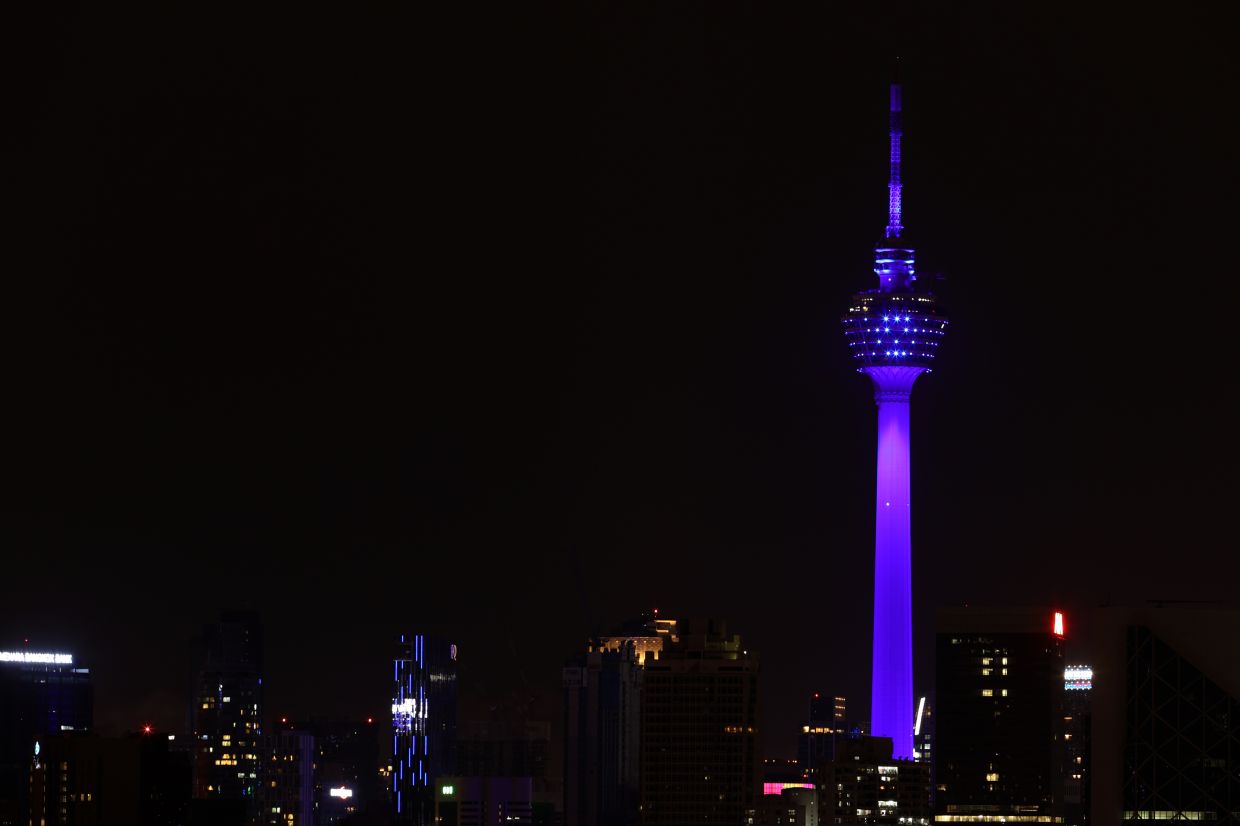 The #LightItBlue initiative originated in the United Kingdom a few weeks ago, when over 100 landmarks were lit in blue.

Blue was chosen because it is the official colour of the medical field.

Federal Territories Minister Tan Sri Annuar Musa, who launched the #LightItBlue initiative at the Perbadanan Putrajaya Complex in Putrajaya on Thursday (April 30), said the aim was to thank the frontliners, whether in the public or private sector, for their sacrifices in combating Covid-19.

Earlier, Anuar said that government buildings, commercial buildings and certain roads in Kuala Lumpur, Putrajaya and Labuan will be lit up with blue lights from 10.30pm to 1am every day until May 3. This, he said, was one of the government's initiatives to show appreciation and solidarity with all frontliners, especially those in the Federal Territories.

“For Kuala Lumpur and Putrajaya, the frontliners include a total of 13,126 health and safety workers.

"In Labuan, there are 1,272 of them, including staff from the ministry, National Security Council, Kuala Lumpur City Hall, Putrajaya Corporation, Labuan Corporation, police, army, state health department, Civil Defence Force, Welfare Department and others, ” he said.

Anuar noted that the numbers do not include volunteers or workers in the private sector and non-governmental organisations.

Cheering on the frontliners, Anuar said that Malaysia would win with the full cooperation from the people as they continue staying at home, in stopping the spread of Covid-19.