A balanced media narrative is in order

FROM the riots in Hong Kong last year, whitewashed as peaceful pro-democracy protests, to the lockdown of Wuhan and other Chinese cities, derided as draconian and an abuse of human rights, the sting was always there, and often not even hidden in between the lines.

All this will be denied, of course, and not just by those media owners and employees but also the readers and viewers who swear by them. It is futile to debate them, such is their ideological bias that they leave themselves no room for doubt, much less introspection. They are entitled to their reading of China, of course, as are their critics to theirs.

It is perfectly understandable that Western media, especially those that publish and broadcast in English, will want to push what they believe is the interest of the West. No one should expect them to speak up for China and other non-Western nations. Or question the liberal democracy dogmas they have grown up with.

To be fair, there are also not a few among them who genuinely believe that what they do is also for the good of the Chinese suffering under the yoke of a totalitarian regime. And so they have gone at it full tilt, especially the Anglophone media.

It would be foolish for people in this part of the world not to see all this for what it really is - a war, not yet a shooting one but a war by other means nonetheless. Only the wilfully blind will fail to see that it is being waged by the United States and some of its allies to stymie a rising China just so they can hold on to their global hegemony.

Demonising and then isolating China, through disinformation and misinformation, is just one of the means. In the relentless pursuit of that goal, truth, to paraphrase what Hiram Johnson, US Senator for California, first said in 1918, has become the first casualty of this war. So much for the self-serving cant about these media being “respected” providers of fair, objective and balanced coverage.

Does all that matter? I submit that it does, to the millions in Singapore, Malaysia and many other former British colonies who have relied all these years on the English-language global media for their news, analyses and commentaries.

It’s time they woke up, if they have not already done so, to the fact that their understanding of what is happening in China, and, for that matter, many other places from Syria to Venezuela, is being shaped by those media with an unholy agenda.This awakening cannot come too soon as some Western media are piling on the pressure by echoing the spurious demands of anti-China politicians that Beijing must pay for the damage caused by the Covid-19 virus which it has set loose on the world.

If allowed to escalate and proliferate, this incitement of people whose lives are being devastated by the pandemic, is sure to result in more racist attacks against people of Chinese ethnicity, particularly in Western countries. It may well spin out of control into an armed confrontation between two sides, very possibly in the South China Sea.

But what can ordinary readers and viewers do? Well, they can send these media organisations a message. Those who have no problem taking pen to paper should write a protest note to them each time they spot a deliberate distortion - or to their respective regulator.

Nothing will come out of it, for sure, but those who are neither pro- nor anti-China but believe in fair play have to take a stand against deliberate bias and make it clear they will not stand for it.

It is in their enlightened self-interest to do so; if these media can target China now, then they can just as easily turn on their country next and cause damage, as was the case for Hong Kong when the Anglophone media turned a blind eye to all the fire-bombing, vandalism and vicious attacks against innocent citizens, and glorified the perpetrators as freedom fighters.

For those not inclined to write, they can just stop reading or viewing biased media. There are Singaporeans who have cancelled their subscription of The New York Times and ceased watching CNN over the slanted coverage of the Hong Kong riots. Yes, they care enough for Hong Kong and, more importantly, for fair play.

Sure, protesting this way may be inconvenient for those who are monolingual in English as there are few other media organisations that can rival the top Western players in global coverage and reach.

But choices in English are still there - Al Jazeera, which says it has more than 65 bureaus around the world and whose Arabic, English and other language networks have a combined reach into more than 220 million households; and CGTN, China’s global television network, which says its free-to-air English service reaches 85 million viewers in over 100 countries.

Admittedly, Al Jazeera and CGTN are nowhere near CNN or the BBC in reach and brand value but any fair-minded reader/viewer who has followed their work for a sustained period knows their products are nothing to sniff at.

Anecdotal accounts suggest that CGTN and, in particular, its presenter Liu Xin are gaining traction among the better educated in Singapore because of their measured and fact-based approach to presenting news and commentaries.

The accent of this commentary is on biased reporting of China. If readers and viewers are reluctant to forgo following Anglophone media despite their thinly veiled bias against China and other non-allied powers like Iran, then the least they can do is to also watch or read nascent competitors for balance.

And not to forget: their own English language national or regional media, too - whether it be the South China Morning Post, The Star in Malaysia or The Straits Times and Channel NewsAsia in Singapore. They make no self-glorifying claims to being the gold standard for good journalism but they do try to be objective, fair and balanced.

Individually, each may not have the resources of the existing global players. But in this regard, there is no reason why they cannot pool resources where possible and compete on the world’s media stage. Fair, constructive competition cannot be bad for media consumers. And the English-language media landscape deserves more than just the Anglo-Saxon narrative.

Leslie Fong is a former editor of The Straits Times. The views here are his own. 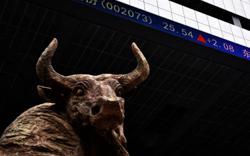