“I mistakenly said 500 countries – what I meant was 500 participants from all around the world, ” he said in a WhatsApp message to The Star on Sunday (April 19).

He added that only 50 countries were participating in the video-conference at that time.

Dr Adham and Zahid were discussing Covid-19 during the call, which was broadcast live on @zahidhamidi.fanpage page on Facebook when he made the “500 countries” comment.

“I am sure that what we’ve done has been recognised by the world, ” said Dr Adham.

To this, Zahid said “congratulations”.

He added that he was then on a video-conferencing call with the health ministers from China and Singapore.

Malaysians quickly caught up on the gaffe – as “500 countries” is a far cry from the 193 sovereign states recognised by the United Nations and the 206 that were registered for the Olympic Games.

On Twitter, Dr Adham’s remarks were quickly mocked and became a meme.

“Here to introduce the most intelligent Minister of Health for my country Malaysia, even the world! Who else can conference call with 500 countries beside him?” wrote @DarrenLoveLife.

User @A_Skywalker_ wrote, “So far I have only travelled to 10 countries - 490 more countries to go.”

“My dream is to travel the world, to (all) 500 different countries, ” wrote @WanNurSyaira.

Even official accounts of companies were playing along, with @GSCinemas writing “Breaking: Wakanda is one of the 500 countries”, referring to the fictional African nation featured in Marvel’s Black Panther blockbuster movie.

Dr Adham’s “500 countries” comment came fresh off last month’s warm water fiasco when he said that drinking warm water can prevent one from getting infected with SARS-CoV-2 (the virus that causes Covid-19). 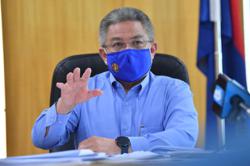