Perak cops to investigate those who ate meal together in tahfiz, deputy minister included

IPOH: All those who allegedly had a meal together at a tahfiz in Lenggong during the movement control order (MCO) – including a deputy minister – will be investigated, says Perak police chief Comm Datuk Razarudin Husain.

He said initial investigations showed that the deputy minister had gone to the ground to check on ministry staff handling Covid-19 in Lenggong.

"However, after checking on the preparations with a state exco member – who is also the tahfiz owner – they visited the religious school.

"The management of the tahfiz had prepared some food, and seeing that the food had already been prepared, he probably had a meal," he added.

From the photos, Comm Razarudin said the participants were seated far apart from one another.

"However, investigations will be carried out on all those who attended the event," he added.

Deputy Health Minister I Datuk Seri Dr Noor Azmi and Perak state exco Razman Zakaria were seen in viral pictures enjoying a meal with about 30 others, including students, at the tahfiz.

The photos, which were first posted on Noor Azmi's Facebook account, were later deleted after many started questioning if they were in violation of the MCO.

Razman, who is from PAS, posted on his Facebook account that they were served "kampung" dishes during the event.

Photos showed there were at from 20 to 30 people together seated on the floor eating. 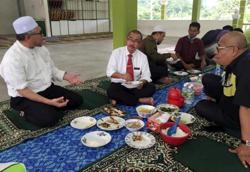