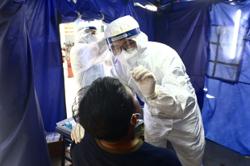 PETALING JAYA: Dewan Rakyat will convene for just one day when lawmakers meet for the first time this year on May 18.

Notice of the one-day meeting was issued by Dewan Rakyat secretary Riduan Rahmat to MPs on Friday (April 17) evening through email.

Yang di-Pertuan Agong Al-Sultan Abdullah Ri'ayatuddin Al-Mustafa Billah Shah will deliver the Royal Address when opening Parliament at 10am on May 18.

The Dewan secretariat also informed lawmakers that only laws and government matters related to the fight against Covid-19 would be the focus of proceedings.

As such, the notice stated that there would be no question and answer sessions or motions raised in the House.

Parliament was to have met on March 9, but was postponed when Perikatan Nasional took over administration following the collapse of the Pakatan Harapan government.

When contacted, PKR communications director Fahmi Fadzil said that the Pakatan presidential council asked for at least two days of meeting to have a more substantive discussion on Covid-19.

"I’m disappointed that it’s this short.

"We suggested other means in order to enable MPs to continue the sitting," the Lembah Pantai MP said.

He noted that the UK Parliament is trying to make changes to allow for all MPs to be present as well as to participate via teleconferencing.

Klang MP Charles Santiago, who confirmed the notice, said the special select committee should be allowed to scrutinise the Covid-19 stimulus package via teleconferencing.

However, he said the Dewan's meeting would be conducted under social distancing measures with advice from the Health Ministry.