Most M’sians okay with longer MCO

PETALING JAYA: Almost half of Malaysians are willing to abide by the movement control order (MCO) should it get extended once again, a survey revealed.

One in seven or 14% said they were agreeable should the MCO get extended for another three to six months.

The survey also found that a majority of Malaysians or 87% had agreed with the first extension of the MCO while only 5% disagreed with it. 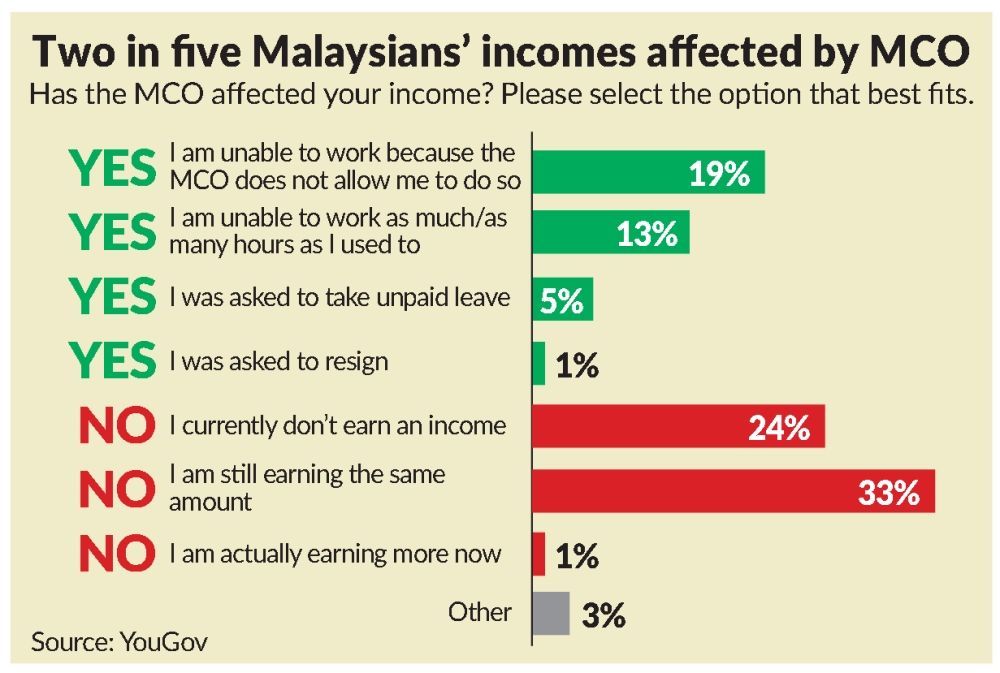 The first phase of the MCO came into force on March 18 and ended on March 31 while the second phase began on April 1 and is scheduled to end on April 14.

Today, the government is expected to announce whether the MCO will be further extended.

Four in five Malaysians polled or 89% claimed that they had been closely following the updates on the MCO while only 3% admitted they had not been doing so.

The survey revealed that those aged between 35 and 44 were found to be those most likely not to follow the order closely while 7% claimed not to do so.

The poll also found that 59% of Malaysians’ income remained unaffected by the MCO while 38% said otherwise.

Almost half or 46% of Malaysians surveyed felt optimistic about the nation’s economic future following the fiscal stimulus package announced by the government.

About 26% felt pessimistic while one in three people was undecided.

Those from high-income households of more than RM8,000 a month – 49% – said they were much more likely to feel pessimistic than low-income earners, with less than RM4,000 a month or 18%.

Asia-Pacific YouGov Omnibus chief Jake Gammon said although a significant number of Malaysians had their income affected by the MCO, “it appears that most are cooperative and in support of it”.

On April 4, The Star reported that an online survey conducted by the National Security Council revealed that an overwhelming 96% of 230,562 people polled want stricter enforcement of the second phase of the MCO.