"We are putting up the fencing at critical areas, and its use should be seen as (indicative of) the level of seriousness in a certain area.

"Imagine what the situation would be like if we only placed cones and 30 people, who are virus carriers, ran out of the building?

“The outbreak impact to other people would be very grave, ” he told reporters after visiting the Op Penawar site with Perak police chief Datuk Razarudin Husain in Jalan Tambun here Wednesday (April 18).

So far, four areas have been placed under the enhanced MCO, namely Sungai Lui in Hulu Langat, Selangor; Simpang Renggam Johor; Menara City One, Selangor Mansion as well as Malayan Mansion in Kuala Lumpur – and they have all been fenced with barbed wire.

In this regard, said the roles of the armed forces and police in roadblocks are subject to the orders of the government, said Hasbullah.

"Armed forces and police personnel have their own functions in MCO operation. For the time being, the army has been ordered to assist police in implementing the MCO, ” he said. – Bernama 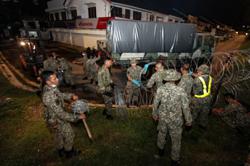