Describing the initiative as a “decentralised production plan”, Taylor’s Me.reka Makerspace makerlab coordinator She Tze Jin said over 1,000 face shields have been donated to hospitals by Monday night.

“The design of the current face shields being produced has been verified by doctors, who helped us (Me.reka Makerspace and Makerzone and Fabspace KL) fine-tune the product.

He also said that funds used to produce the face shields were raised from the Biji-Biji Initiative, a social enterprise that inspires action through innovative problem-solving, utilising creativity and technology as powerful tools of community-driven solutions.

Taylor’s Me.reka Makerspace is a collaborative learning hub for academics, industry players and entrepreneurial communities, set up by Taylor’s University and Me.reka, the education arm under the Biji-Biji Initiative.

The mass production of face shields is taking place at Taylor’s Me.reka Makerspace at Taylor’s Lakeside Campus, Me.reka at Publika, Spectrum Laser Studio in Kepong and Admart Solutions in Muar.

Calling on industry players with 3D printers, laser cutters or similar equipment to participate in this initiative, She said he welcomes anyone who could connect him to face shield manufacturers, plastic mould makers, suppliers of 0.2mm transparent A4 plastic sheets and 4mm to 8mm acrylic sheets, as well as organisations in need of face shields. 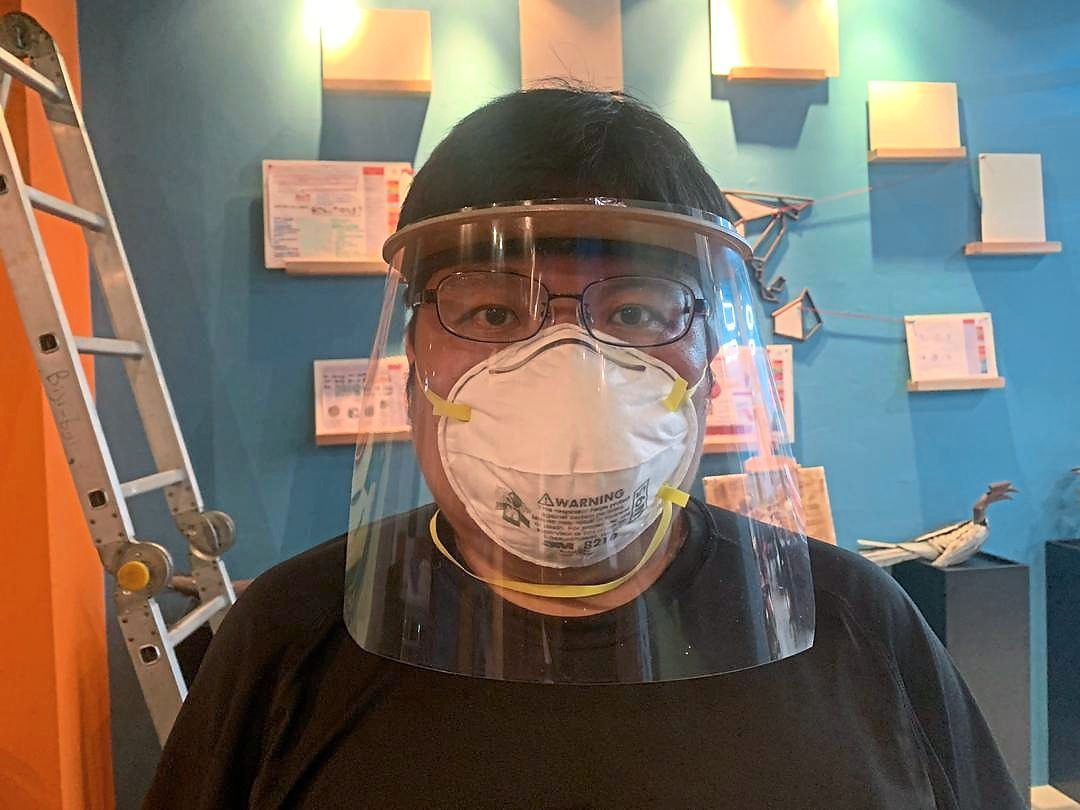 The initiative, which began on March 23, has produced about 500 face shields. About 30 units were given to UTHM staff, 200 to Hospital Enche’ Besar Hajjah Khalsom Kluang, and the remaining ones to Sultanah Nora Ismail Hospital Batu Pahat.

In Nilai, Negri Sembilan, lecturers at Universiti Sains Islam Malaysia (Usim) have come up with the idea of making face shields for healthcare frontliners as well.

The group, led by the science and technology faculty lecturer Dr Mohd Ifwat Mohd Ghazali, started working on it last Monday as they wanted to do their bit to better equip frontliners handling Covid-19 cases.

The Usim management, he said, had not only agreed to the idea but decided to distribute the face shields and disposable protective wear for free.

He said the face shields were designed using 3D printing machines owned by the faculty.

“We have five such machines and each can produce between five and 10 face shields a day, ” he said adding that the team has so far produced 40 units.

Among the items used to produce the face shields include 3D filaments, A4 transparent sheets, foam padding, glue, tapes and elastic rubber.

“To date, we have given 12 units to teams at the Tuanku Ja’afar Hospital and another 10 to Ampang Jaya Hospital in Selangor, ” he said, adding that two sets have been given to the university’s security unit at the main entrance as the guards are required to take the body temperature of staff and visitors.

He said the team has also received requests for face shields from other hospitals and clinics.