PETALING JAYA: Another Covid-19 patient has died 7.40pm yesterday, bringing the total number of fatalities to 16.

The deceased had earlier shown symptoms for five days before he was admitted to the Tuanku Mizan Armed Forces Hospital on Mar 16, before he was moved to Hospital Kuala Lumpur on Mar 18.

The patient’s condition deteriorated, and was admitted to the intensive care unit for assisted breathing, before the positive Covid confirmation came on Mar 21.

At a press conference, Dr Noor Hisham said despite the rise in new Covid-19 cases to 1,624, early treatment has helped to keep the number of deaths at about 1%.

He reiterated the importance of the movement control order (MCO) in breaking the chain of infection including early treatment of positive cases of those with early stages of illness.

“If we compare to the global fatality rate of 4.5% it is expected that we should have 45 deaths at the moment.

“It is important for those who have breathing difficulties to immediately come in to the hospital.

“Do not wait until it reaches the third to fifth stage, ” he said told a press conference at the ministry’s headquarters yesterday.

Patients who are tested positive but without symptoms are categorised under stage 1 of infection while those under stage 2 showed only mild symptoms.

Dr Noor Hisham said so far 80% of the patients are those under stage 1 and 2.

He announced that of the new 106 cases, 43 were linked to the tabligh cluster.

He added that 64 patients were admitted to the Intensive Care Unit (ICU), and 24 others were on ventilators.

He also cautioned the public against stigmatising those who attended last month’s mass tabligh gathering in Kuala Lumpur.

He said the attendees should not be blamed for the uptick of Covid-19 cases, after nine deaths were linked to the event’s cluster.

“Let us not discriminate against the tabligh followers, ” said Dr Noor Hisham.

“The result of the rRT-PCR technique is important in determining an effective treatment for Covid-19 patients.

“The tests using rapid test kits in the market only detects the amount of antibody produced by patients who get infected by Covid-19. 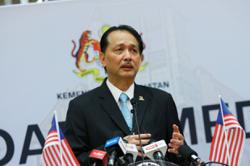