KLANG: Five Selangor Islamic Religious Department (Jais) assistant marriage registrars are under quarantine after they came into contact with persons infected with Covid-19.

The men, known as imam nikah, aged between 37 and 55, have also undergone tests for Covid-19 and were awaiting the results.

According to Jais director Mohd Shahzihan Ahmad, the five imam nikah had come into contact with people who had tested positive for Covid-19 infection on different occasions.

The first Jais officer, 37, had conducted the akad nikah (solemnisation of marriage) ceremony of a Covid-19 positive groom on March 6.

The bride as well as several relatives had also subsequently tested positive for Covid-19. They are suspected to have been infected by a male family member of the groom.

That man had apparently attended the tabligh event at the Seri Petaling mosque from Feb 27 to March 1.

The second imam nikah, 43, had had close contact with the chairman and deputy chairman of a mosque who had both tested positive for Covid-19.

The third person is a 55-year-old assistant marriage registrar who had shook hands with two tabligh individuals who had tested positive for Covid-19.

The fourth imam nikah, 49, had had close contact with the father of a groom who had tested positive for Covid-19.

The final imam nikah is a 45-year-old who had attended the tabligh event at the Seri Petaling mosque from Feb 27 to March 1.

"They are all under quarantine at home," said Shahzihan when contacted.

He also added that all akad nikah have been temporarily halted by Jais.

"Our move of postponing the akad nikah ceremonies are just like the directive issued by the Federal Territory, Perak and Sarawak to counter the spread of infection," said Shahzihan. 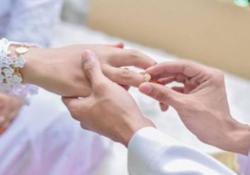 S'gor to allow akad nikah in person during recovery MCO