This comes following the beginning of operations during the MCO to prevent the spread of Covid-19.

He said the ops began at around 6pm with a total of 27 officers and 81 personnel involved in conducting roadblocks and checks on business premises as well as public areas around Shah Alam and Petaling Jaya.

"For now we will advise those who are outside to only go out when necessary or for emergencies.

"During the ops, we also found several businesses, including a car wash, restaurant and vape shop, open for business. We advised them to close immediately or face stern action," he said.

"We advised them to disperse immediately and close the temple," he said.

He added that during checks in Padang Jawa, several individuals were found loitering near a motorcycle shop and at a flat's parking lot.

He said all of them were ordered to disperse and go home.

"We hope people here will take the MCO seriously as this is the best way to curb the spread of the virus.

"During our roadblocks we also found instances of three to four people going out together to get food and such.

"We advised them not to go out in a big group and to remain home as much as possible," he said.

"This initiative is being used at mosques in Cheras to advise the public to stay in their homes and refrain from gatherings or going outside without valid reason.

"Our personnel in patrols cars also got out their loudhailers to tell the public to stay indoors," he said, adding that roadblocks were also set up to ensure people were not going out unnecessarily. 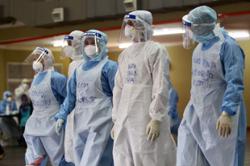