Tuan Ibrahim: All good initiatives to be continued

PUTRAJAYA: All the good initiatives introduced during the Pakatan Harapan administration will be continued in the Environment Ministry, says its minister Datuk Tuan Ibrahim Tuan Man.

This includes the Malaysia Roadmap Towards Zero Single-Use Plastics 2018-2030, he added.

“To support this plan, I have instructed the officers to continue preparing the circular economy roadmap for plastics, to ensure the issue of single-use plastics can be tackled holistically, ” he said.

Tuan Ibrahim added that the ministry would also continue its enforcement on the import of plastic waste into Malaysia.

“We have already sent 150 containers back to the export countries. We are now working to send back another 84 containers, ” he said.

Among the export countries are Belgium, Britain, France and Vietnam.

On another matter, Tuan Ibrahim said PAS was fine despite being given a “small share” in the Perikatan Nasional Cabinet line-up.

The PAS deputy president said what was more important was for Perikatan to prove itself as a government to the people.

“We work together as a team in Perikatan.

“Whether we get small or big posts, we are all part of one component which will form a government that can deliver the people’s aspirations, Insyallah.

“We have no problems. Most importantly, we can prove our abilities and the people can experience the presence of the Perikatan government, ” said Tuan Ibrahim at a press conference after chairing his first post-Cabinet meeting here.

Tuan Ibrahim is one of the three PAS MPs who have been appointed as ministers.

Bersatu has 11 ministers in the Cabinet, including Prime Minister Tan Sri Muhyiddin Yassin, while Umno has nine.

Gabungan Parti Sarawak, which similarly to PAS has 18 MPs, has four ministers, including Works Minister Datuk Seri Fadillah Yusof who is one of the four senior ministers. 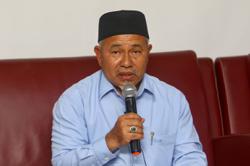