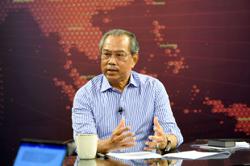 PUTRAJAYA: On its first day at work, the new Perikatan Nasional Cabinet wasted no time and has set up the Economic Action Council (EAC) to address economic woes.

“The EAC will sit every week. Not once a month. Its first meeting will be on Monday. Any decision made at the council will then be brought to the Cabinet meeting on Wednesday for approval.

“We want to show that we will not waste time in addressing these problems, ” Muhyiddin told a press conference after chairing his first Cabinet meeting at Perdana Putra here.

Bank Negara Governor Datuk Nor Shamsiah Mohd Yunus and other experts will also be included in the council.

Muhyiddin said a joint secretariat involving the Finance Ministry and the Prime Minister’s Department (Economy) would be set up to oversee the council.

He said the B40 group in particular would be given extra attention as they were the ones who were affected most by the economic situation.

On the RM20bil economic stimulus package which was launched by the previous government to cushion the impact of Covid-19, Muhyiddin said it would be reviewed.

“We want to see where else we can improve because we want to ensure all our target markets are given the right attention. We also want to bring back investors’ confidence, ” said Muhyiddin, adding that the review could take one or two weeks.

On whether the national budget needs to be recalibrated in light of the plummeting oil prices, Muhyiddin said this would be decided by the EAC.

He also said the government would look into whether the controversial Goods and Services Tax (GST) would be brought back.

“We will see if there is a need for it. We will look into everything... be it GST, SST. It must be in line with the government’s broad policy.

“Whatever options we choose, it cannot be burdensome to the people. We must find something that is a good balance, ” he added.

On whether the ministers will take a pay cut to compensate for the increase in Cabinet size, Muhyiddin said he was willing to take up the challenge.

After the press conference, Muhyiddin also launched the Covid-19 Fund, which will be used to help those affected by the coronavirus outbreak.

He said the government would allocate RM1mil to the fund, adding that the public was encouraged to donate.

The Cabinet members who were sworn in before the Yang di-Pertuan Agong on Tuesday met for the first time yesterday at their weekly meeting.

Chaired by Muhyiddin, the meeting was also attended by Chief Secretary to the Government Datuk Seri Mohd Zuki Ali. 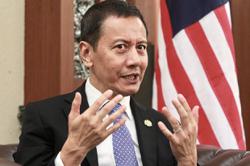