KUALA LUMPUR: A pair of underpasses have been completed under the KL-Seremban Highway over the weekend, marking another milestone in the progress of the Klang Valley MRT network.

This pair of underpasses for the Sungai Buloh-Serdang-Putrajaya (SSP) Line, each measuring 60m in length, are located about 5m below the road surface, and their construction did not cause any obstruction as the expressway remained open throughout the construction period.

MMC Gamuda deputy project director Amir Malik Faeiz said: “To cross the expressway, studies indicated that an underpass was the ideal solution as constructing a viaduct crossing above was not possible with the low land on the Sungai Besi side of the expressway. This made tunnelling under the expressway the best solution, ” he said.

The underpasses, located between the upcoming Taman Naga Emas and Sungai Besi MRT stations, were built using a combination of methods such as micro-tunnelling using mini tunnel boring machines, and pipe-jacking beginning March 2019.

On the progress of the SSP Line, Amiruddin said the overall construction was now more than 70% complete, and it is on schedule even though the project structure was changed midway from a Project Delivery Partner model to turnkey.

For the underground section, continuous twin tunnel sections between Sentul Barat Station and Ampang Park MRT Station, and between Chan Sow Lin and Bandar Malaysia Selatan had been completed, with a total tunnel excavation distance of 20km out of 23.6km or 85% completed.

Averaged across the overground and underground portions, the SSP Line has achieved more than 70% completion.

Phase One from Sungai Buloh Station to Kampung Batu will begin operations in July 2021, while the rest of the line from the Kampung Batu station to Putrajaya Sentral will be operational under Phase Two in July 2022. 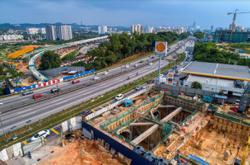