The Bukit Aman CID director said foul words were used against the King and the suspect even expressed his willingness to go to jail for his rant.

"He was detained on Sunday (March 1) and is being investigated under the Sedition Act and Section 233 of the Communications and Multimedia Act.

"He will be remanded to facilitate investigations," Comm Huzir said in a statement on Sunday (March 1).

The case is among four cases that could disrupt public order being investigated by the Bukit Aman Special Investigations Unit (D5), he added.

The other two similar cases involved two other Facebook users who made disparaging remarks against the King, Comm Huzir said.

"We will investigate further and track down these individuals," he added.

Comm Huzir said the unit is also investigating lawyer Fadiah Nadwa Fikri for her Twitter post urging the people to join a rally on Saturday (Feb 29).

"The case is classified under Section 4(1)(a) of the Sedition Act as well as Section 233 of the Communications and Multimedia Act for wrongful use of network services and facilities," he said.

Comm Huzir urged the public to hold true to the principles of "Rukun Negara", which is loyalty to King and country.

"Don't produce or spread statements, articles or unverified news that can be deemed seditious.

"Such statements might disrupt safety and public order as well as incite anger and disunity among the people," he said.

The police will not compromise in taking action against those who break the law, he added. 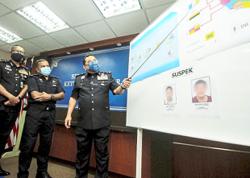