According to a source at the Attorney General's Chambers (AGC), Thomas handed in his resignation letter to interim Prime Minister Tun Dr Mahathir Mohamad on Friday (Feb 28) evening.

Thomas' two-year term as the AG should expire this June.

It is learned that Thomas had cancelled an appearance on a TV talk show this evening at the eleventh hour.

He was also leading the prosecution in the SRC International Sdn Bhd trial, where former prime minister Datuk Seri Najib Razak is accused of misappropriating RM42mil from the company's funds.

Exactly a week ago, Thomas dropped all 34 charges against 12 men, including 2 DAP state lawmakers - Gadek assemblyman G.Saminathan and Seremban Jaya assemblyman P. Gunasekaran - for allegedly having links with LTTE.

During his tenure, high profile figures, including Najib and several others, have been brought to court for corruption charges. 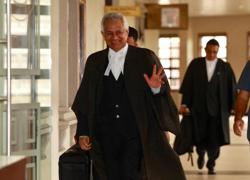