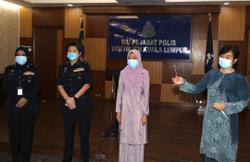 PETALING JAYA: The ROSE Foundation and Laboratory in Malaysia was launched to provide integrated screening services for cervical cancer - the third most common cancer among Malaysian women.

Its Medical Technical Advisor, Prof Dr Woo Yin Ling said the Foundation aims to encourage more women, especially among the B40, to screen for cervical cancer through the use of a self-sampling swab.

She said this method may be more effective in getting women screened as they can use the test themselves, as compared to a conventional pap smear tests which can be seen as "embarrassing, invasive and inconvenient".

"Only 12.8% of Malaysian women would have ever gone for one pap smear test, and to eliminate (cervical) cancer, we need 70% of our women coming forward (for tests).

"The ROSE programme is a first of its kind solution in the world, which addressed the social and health barriers in helping women come forward to have these tests," she said in a speech at the launch held at Armada Hotel near here on Monday (Feb 17).

Dr Woo, who is also a consultant obstetrician and gynaecologist, said that as a start, the Foundation is giving out 6,000 self-sampling tests under a Corporate Social Programme by Etiqa Insurance and Takaful.

She added that the Foundation is working with several klinik kesihatan (health clinics) in Selangor, with events already held in more than six states in Malaysia.

Those from B40 households, she added, will have free screening at the health clinics, whereas others who are interested could purchase the self-testing swab for RM250.

The ROSE Foundation, which stands for Removing Obstacles to cervical Screening, is a partnership between Universiti Malaya and VCS Foundation of Australia.

The ROSE programme, which is the precursor to the setting up of Foundation and Laboratory, was launched by Deputy Prime Minister Datuk Seri Dr Wan Azizah Wan Ismail in January last year, and has screened about 8,000 women from B40 backgrounds.