Cambodian sausages a hit in Kelantan 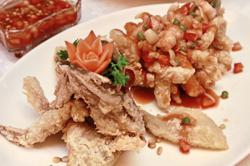 KOTA BARU (Bernama): The enticing aroma of grilled Cambodian sausages coming from Norhayati Abdul Ghani’s shop in Jalan Penambang, Kampung Banggol here, has made it a favourite spot for meat lovers for the past two years now.

The traditional Cambodian dish of stuffed cow intestines which the 48-year-old makes with her husband, Rashid Jusoh, 51, are sold uncooked as well as barbecued, and customers from as far as Kedah and Penang can’t get enough of it.

Her shop is open from 9am to 7pm every day, and you can get four grilled sausages or five uncooked ones for RM10.

"My customers are not just from around Kota Baru but other states, too, and some will even request for the sausages to be sent through the mail. The sausages can be refrigerated for up to a month.

"On normal days, I sell about 250 sausages and double that when it is the holidays, ” the mother-of-three told Bernama.

She said washing and scraping the intestines clean till they looked like clear plastic required almost 12 hours of toil and must be done carefully to avoid tearing them and making them unusable.

She said her husband helps with processing up to 150kg of meat at a time, which is the equivalent of a week’s worth of stock.

"The ground beef (with special seasoning) and some fat is stuffed into the natural casing using a machine, then the sausages are dried in the sun for two days to enhance the flavour.

"The sausages are tasty and have a unique aroma when they’re hot, and normally customers will have them plain or even with rice, ” said Norhayati, adding that she provides a dipping sauce which she makes herself.

Wan Mohd Juraij Abdul Mutelib, 33, from Kampung Banggol, said he has been eating the sausages every day for two years.

"I’ll spend RM10 to RM15 every other day to get a supply of grilled sausages. You could say that this is the only shop selling this food in this state (Kelantan). It tastes great, is crispy on the outside and soft on the inside, ” he said.

Khatijah Yusof, 61, from Kampung Penambang, said she usually gets about RM20 worth of sausages.

"I’ll buy them uncooked because you can keep them longer and they’re easy to cook. Usually I’ll fry them and eat them with plain rice. They’re also nice in fried rice, ” she said. - Bernama 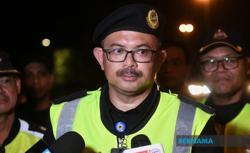