Mahdzir: I was pressured by Rosmah

The second day of Rosmah’s solicitation of bribery and graft trial saw Datuk Seri Mahdzir Khalid revealing the details of the pressure he faced to approve the solar hybrid project for 369 rural schools in Sarawak.

Mahdzir said the pressure came from Rosmah, wife of Datuk Seri Najib Razak who was part of what he termed “Team Saidi”.

The pressure came as Mahdzir himself had reservations about approving the project as he doubted Jepak Holdings’ capabilities to carry out the work, the court was told yesterday.

“I recall an incident on June 23, 2016, after a breaking of fast event at the Prime Minister’s official residence in Putrajaya.

“While shaking Rosmah’s hand as I was leaving, she told me something like: ‘Can you take a look at Cikgu (teacher) Aazmey’s project? Can you speed it up?’” he said, adding that he understood this remark as Rosmah asking him to speed up the approval process for Jepak Holdings’ solar hybrid project application.

“This incident strengthened my belief that Rosmah was in ‘Team Saidi’.

“Since Rosmah herself had spoken to me (about it), I felt that I needed to take it seriously as she is the wife of the prime minister who is influential and wields authority.

“Her authority is proven when she, as the prime minister’s wife, ordered me, the education minister, to ‘review’ and ‘speed up’ the solar hybrid project.”

Mahdzir said that intense pressure to approve the proposal also came from Saidi and Rayyan Radzwill Abdullah (Saidi’s business partner), who threatened him.

“After April 2016, Rayyan started to pressure me to give the solar hybrid project to Jepak Holdings.

“Rayyan told me to just follow the instructions of the prime minister and there was no need to go through the technical process,” he said, adding that Rayyan said this after he informed them that the Education Ministry had sent the application to the Technical Committee.

“Rayyan threatened me by saying that I would not be education minister for long because I did not follow Najib’s orders,” he said.

Mahdzir noted that the solar hybrid system demanded careful planning as the needs and challenges of Sarawak rural schools had to be taken into account.

“I also doubted Jepak Holdings’ capabilities to carry out the project, especially one of a scale such as this,” he said.

Following the pressure, Mahdzir appointed Jepak Holdings to carry out a pilot project for 16 schools in Mukah and Daro districts and 12 schools in the Baram district.

“In my opinion, the pilot project could test the efficiency and feasibility of the solar hybrid project and Jepak Holdings’ capabilities to handle the project.

“This is important as the project proposed by Jepak Holdings involved 358 schools,” he said.

Mahdzir said from his interaction with Saidi and Rayyan at that time, he felt that the duo were unhappy with his actions.

The court then heard that Rizal, Rosmah’s former aide, contacted Mahdzir in May 2016 to question his move of only giving a pilot project to Jepak Holdings when Najib had given instructions to cancel the old system and replace it with the new system.

“Rizal also told me that Najib had made the decision and that ma’am knew about the project,” he said, adding that he knew ma’am referred to Rosmah.

Mahdzir told the court that he then received a letter dated Nov 6, 2016, with instructions from Najib to issue a Letter of Award (LOA) as soon as possible.

“When I received this letter, I felt pressured by ‘Team Saidi’ to issue the LOA to Jepak Holdings as soon as possible,” he said.

He added that he had started to avoid Saidi and Rayyan by then.

Mahdzir was the fifth prosecution witness.

Shamsul, who is Saidi’s driver, said in the first instance, he delivered two black luggages to a building beside Pavilion KL along with Saidi and a man known as Razak.

Shamsul said he did not know the content of the bags.

“I am sure that the bags were empty when I brought them into the bank and when I carried them later into the building, they were so heavy that I couldn’t carry both at the same time,” he recalled.

He said that Rizal was there at that time.

The second instance was when he was asked to transport two cash-filled backpacks to Rosmah’s Jalan Langgak Duta house.

Shamsul said he was asked to buy two backpacks before being asked to join Saidi at the Medan Tuanku Maybank branch.

“While at the upper floors of the bank, Saidi told me to put the bundle of cash in RM100 denominations into those two bags,” he said.

Upon arriving at the Jalan Langgak Duta house, he helped to carry the two backpacks into the house and placed them on a green sofa.

He remembered only that this incident happened in 2017 but not the time and date.

The trial before Justice Mohamed Zaini Mazlan continues on Monday. 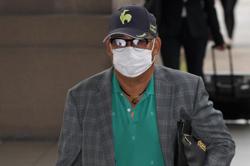