SEPANG (Bernama): Malaysian authorities took all precautionary measures when receiving Malaysians evacuated from coronavirus-hit Wuhan in China at the KL International Airport (KLIA) along with their spouses and children, some of whom are non-Malaysians.

They arrived home at 5.57am Tuesday (Feb 4) on board a special AirAsia flight in a Humanitarian Assistance and Disaster Relief (HADR) mission mounted by the Malaysian government.

The 133 passengers and crew were met, among others, by a Hazardous Material (Hazmat) team and Health Ministry personnel on the tarmac before being taken a short distance by bus to the Air Disaster Unit (ADU) at KLIA where the decontamination and health screening processes took place.

Mindful of the danger posed by the virus that has reportedly killed more than 360 people, mostly in China, stringent procedures were laid out for the group arriving from the Wuhan Tianhe International Airport, to eliminate any risk of infecting others.

The plane bypassed the normal parking bay at KLIA, and instead taxied to a designated area not far from the ADU.

Those who disembarked from the aircraft did not enter the KLIA building, reducing the risk of contact with others.

The transfer of passengers and crew from the plane to the ADU took about two hours, with just one bus belonging to the Fire and Rescue Department used, another measure taken to check any possible spread of the virus.

Even the bus driver was seen wearing protective gear, as the passengers who were all wearing face masks, were transported to the ADU.

Following the health screening procedure, two Fire and Rescue Department buses left the ADU under police escort at about 9am to a monitoring facility called the Home Surveillance Centre, where the returnees will undergo a 14-day quarantine.

Another two buses were also seen leaving the ADU for the monitoring facility later.

So far, there has been no official word on the number of people brought to the facility or taken to hospital.

It was reported earlier that those with symptoms would be sent to hospital while those who cleared the screening would be sent to the monitoring centre, which has been placed under tight security.

The mission to fly home the Malaysians and their families was undertaken by 12 AirAsia crew members, eight mission officers as well as six officials from the Malaysian embassy in Beijing.

The aircraft, which left Malaysia for Wuhan at 3.50pm Monday (Feb 4), also took along 500,000 pairs of rubber gloves as a contribution to the Chinese government to deal with the coronavirus outbreak which has also spread to dozens of countries. – Bernama 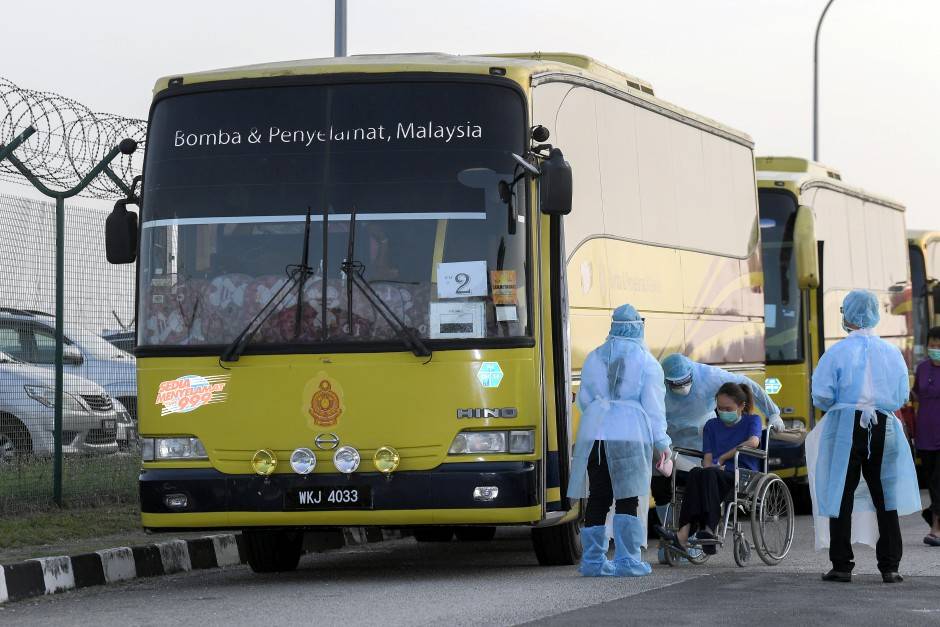 No hugs await M’sians from Wuhan

Special flight to carry Malaysians back from Wuhan leaves KLIA2