JOHOR BARU: Their cousin, the rat, is getting all the limelight this Lunar New Year but hamsters are cashing in on the fame as well.

Pet store assistant Mohn Daniel Hafizuddin, 24, said the number of people buying hamsters has been on the rise the past week as Chinese New Year approaches.

The shop has sold at least six hamsters in the past week, he said, compared to about two or three in previous weeks.

He noted that many people had stopped by at the store to find out more about hamsters.

“Hamsters have gained popularity over the past few years.”

He said hamsters would not require much attention unlike cats and dogs.

“Yet, they provide great companionship, ” he added.

However, he cautioned that first-time owners would need to learn about the habits and method to care for the hamster before keeping it as a pet.

His shop sells threes species of hamsters: the Syrian, Roborovski and Winter White.

Pet store company director Bryan Loi, 34, said that an average of 200 hamsters were sold monthly at its three branches around Johor.

“The popularity of hamsters has gone up in the past few years, even before the Year of the Rat.

“While we have yet to see a significant increase in the number of hamsters sold since New Year, we expect sales to be brisk in the coming weeks, ” he said.

He added the popularity of hamsters was due to its small and adorable features, and that it required lower maintenance compared to other pets.

Prevention of Cruelty to Animals (SPCA) Johor Baru vice-president Dr Edwin Singam urged people to ensure that they were ready to take on the responsibility of caring for the animal before deciding to get one.

“During the Year of the Dog, many pet owners adopted or bought the animal as pets.

“But they ended up giving it away or leaving it on the street.

“I hope this does not happen again.

“Those who want to get hamsters should really think about it, ” he said.

He added that people should not get a hamster just because it is the Year of the Rat or that it was a “trend” to do so.

“You should get it only because you really want to care for it, ” he added. 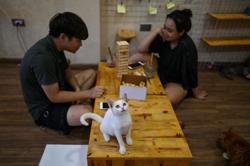