KUALA KANGSAR: Datuk Seri Anwar Ibrahim will not allow anyone to paint a picture that the party is weak.

Speaking at Perak PKR's 20th Convention at Dewan Jubilee here on Tuesday (Dec 3), the PKR president said he was a patient man but there was a limit to it.

"There are some people who say my patience level is almost godlike.

"I can accept comments and ideas from the people but if someone says that the party is weak, I will not have it. Don't test me.

"As long as I'm party president, I will defend the party," he added.

Anwar also called on party leaders, especially cabinet ministers, to go down to the ground to know what was actually happening.

He said they needed to hear the problems of the people, regardless of race.

Anwar also called on the people not to waste time fighting each other over racial issues.

"People need to be smart. Why fight? 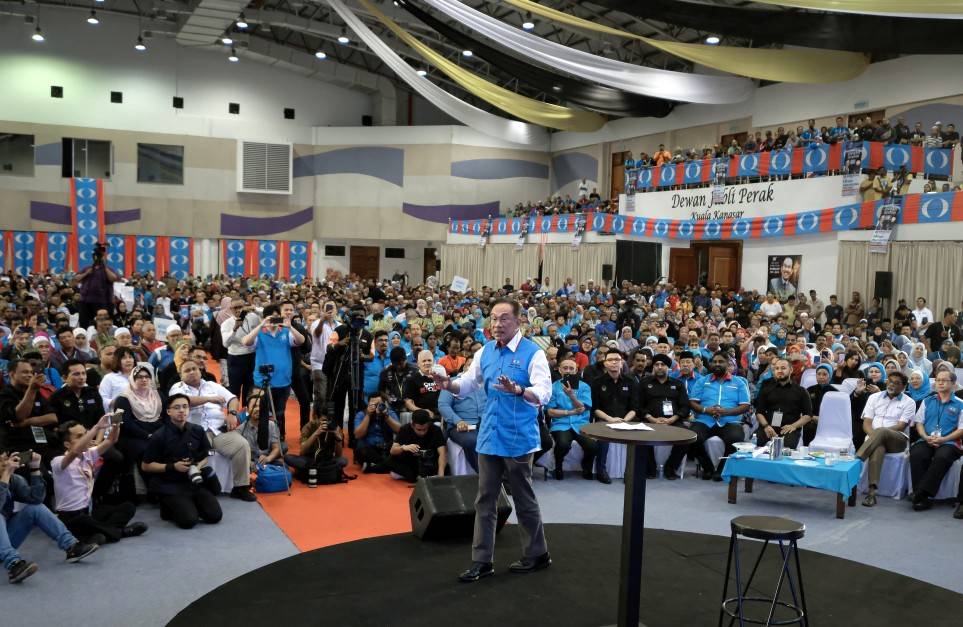 Anwar speaking at the Perak PKR convention in Kuala Kangsar on Dec 3, 2019. – Bernama

"Don't be a tool while some Datuk Seri or Tan Sri continues to seek riches," he said.

Anwar also said that the Government needs to ensure the country's economy grows.

"For 10 years, it has not improved. When our revenue stagnates, we cannot give back to the people," he said.

"Vietnam has also overtaken us, which was why we needed to bring down the previous government to bring changes," he added.

At a separate press conference, Farhash was asked about the possibility of having two parallel party congresses this weekend.

He said there was only a small group of people creating friction within the party.

"We will see later, with the attendance in Melaka. It will be clear then, that we all strongly behind the party and the president," he added.

It was reported that one would be opened by Anwar in Melaka while another, purportedly by party deputy president Datuk Seri Azmin Ali's camp, would be held in Kuala Lumpur.

A poster for a two-day event in Kuala Lumpur is also making its round on social media.