The High Court here was told today that in total, the couple owned 20 vehicles including three Toyota Vellfire, a Lexus LX 460, a Lexus, a Toyota Land Cruiser, a Honda Odyssey and a Chrysler Jeep Wrangler.

"I refer to the document of the (vehicles bearing registration number) SAB 38 M (the Lexus) and I confirm the road tax fee for the vehicle is RM5,900.80.

"I refer to the SAB 38 A (Toyota Land Cruiser) vehicle information document and I confirm the road tax fee for the vehicle is RM4,366.80, ” said the 10th prosecution witness.

He said this while reading his witness statement on the sixth day of the trial of the former deputy prime minister who is facing 47 charges involving millions of ringgit of Yayasan Akalbudi funds during lead examination by deputy public prosecutor Lee Keng Fatt.

When asked by Lee whether the vehicles were privately-owned, Zaharudin replied: "Yes”.

Lee: As for the detailed information of the vehicle and insurance you refer to, is it updated up to the day of the investigation?

Ahmad Zahid, 66, pleaded not guilty to 47 charges with 12 of them for criminal breach of trust, eight for corruption and 27 for money laundering involving millions of ringgit in Yayasan Akalbudi funds. 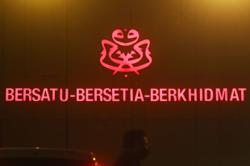