Audit: I see dead farmers, I give them money

KUALA LUMPUR: The Auditor-General's Report 2018 revealed that RM57.92mil in subsidies and incentives were paid out to dead farmers between 2016 and 2018.

This was discovered after the analysis of registration of the names of the farmers against their identity cards details with the National Registration Department. (NRD).

“A total of 10,271 farmers who had died still received subsidies and incentives during the replanting season,” the report stated.

Further analysis discovered that the dead farmers continued to receive their subsidies and incentives although records showed they died between 1967 and 2019.

Based on feedback from the Agriculture and Agro-based Industries Ministry, it was confirmed that 11,712 farmers had passed away, while details of another 5,099 farmers were not found with the NRD.

The audit also discovered the identity card numbers of between 7,894 and 10,034 subsidy recipients were incomplete and raised doubts involving subsidies totalling RM108.08mil.

Also revealed was that between 2016 and 2018, claims by companies for padi fertiliser schemes had exceeded their contract value by RM178.23mil.

The audit also found that the ministry had overpaid a total of RM17.58mil for claims under the padi production incentive and pesticide scheme in 2016.

Audit: Over 95% of Chinese and Indian tourists have no exit records 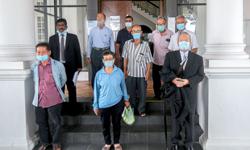