Kwok falls in love with Penang

GEORGE TOWN: So impressed with his first visit to Penang, Hong Kong superstar Aaron Kwok now wants to bring his family over to sample the delicious food in the near future.

“This is my first time here in Penang. I will definitely bring my daughters here during my next visit, ” he said on Thursday.

Kwok, 53, was in town for the grand opening of a watch boutique at a shopping mall here.

Kwok said he was a fan of the delicious food in Penang.

“I love the char kuey teow. It is really delicious.

“I was told that durians are one of the famous fruits here but they are out of season now. I will try to get products made from durian to bring back home, ” he said during the boutique’s opening ceremony.

Kwok added that he had to rush home yesterday to celebrate his mother’s 86th birthday.

In his heyday, Kwok was dubbed as one of the “four heavenly Kings” of the Chinese entertainment industry. The others were Jacky Cheung, Andy Lau and Leon Lai, who are all married.

The Cantopop king was one of the most eligible bachelors around until he married model-actress Moka Fang.

Hundreds of fans, old and young, flocked to the mall several hours before the event to catch a glimpse of the superstar.

They were seen shouting Kwok’s name and taking out their smartphones to get a shot of him. 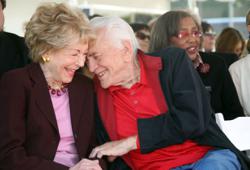