PKR central committee members including Azmin, vice-president Zuraida Kamaruddin, Tian Chua and 17 others, have rejected the sacking of Zakaria.

The central committee members, in a memorandum dated Nov 30 to the PKR disciplinary board, labelled the sacking of Zakaria as invalid.

In the memorandum, the central committee members also said the decision to sack Zakaria does not fulfil the principles of justice as it did not go through due process.

"This is strengthened by an open statement by the Malaysian Anti-Corruption Commission (MACC), which explained a misunderstanding on their part to the Disciplinary Board.

"It is also stated that after investigations, there is no such case as alleged," it said.

"We represent a majority of central committee members who were chosen by party members and we want to state our rejection towards the decision.

"We are urging for the party president to apologise over the hasty decision which clearly did not get the support of two-thirds of the central committee members," it said.

Last Sunday, PKR announced that Zakaria and Ismail Duhladi, an ordinary member from Pahang, were stripped of their party membership following corruption allegations brought against them by the MACC.

Zakaria was the former political secretary to Works Minister Baru Bian but resigned from the post voluntarily in February this year. 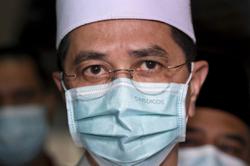