Among them were top PKR leaders and ministers.

Zuraida was at both meetings and said that Azmin merely briefed them about what transpired during the meeting with 22 Umno MPs at his Putrajaya residence.

Azmin's political secretary Hilman Idham said that of the dozen, only four of them were present at the meeting with the Umno MPs.

"As it has created suspense, Azmin decided to call PKR MPs who wanted an explanation to meet him at the parliamentary office today," said Hilman. 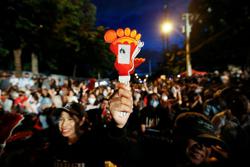