PUTRAJAYA: A possible solution to the woes of contract doctors is in sight, and one of them involves getting public universities to lower their intake of medical students, says Datuk Seri Dr Dzulkefly Ahmad (pic).

His ministry officials and the Health Advisory Council are looking at coming up with long-term measures to resolve the problem, said the Health Minister.

“We have been bouncing ideas because this issue needs a long-term solution.

“We hope that by the first quarter of 2020 we can come up with a solution, ” he said after chairing the ministry’s post-Cabinet meeting yesterday.

Between January and November this year, 6,307 medical graduates have been offered the position of contract-based doctors.

There are 1,152 people on the waiting list, according to the ministry.

Dzulkefly also pointed out that the ministry is only obligated to provide placings for housemanship and contract-based doctors.

For permanent positions, the ministry no longer absorbs all housemen who are sponsored by the government, he noted.

Since 2017, permanent employment for doctors, pharmacists and dentists in the civil service is no longer guaranteed.

The government announced in Budget 2017 that only the best would be given permanent posts for the three professions.

Dzulkefly said that last year, the ministry had proposed to the federal agency to create 21,741 new posts to meet the need to service new facilities and those that had been upgraded.

The ministry has submitted an application for 10,675 various permanent posts and the Public Service Department is going through the applications.

On whether stopping the intake of fresh medical students by universities is an option, the minister said it would create a gap in the number of new doctors needed by the country.

On whether private hospitals should provide housemanship training, Dzulkefly said the idea had been mooted.

“The hospitals need to ensure they have sufficient specialists and facilities as well as a good case mix to be a training hospital, ” he explained.

On another matter, Dzulkefly said Pharmaniaga will continue to procure drugs and medical supplies for the ministry for 25 months ending Dec 31,2021.

He said the Cabinet had agreed for Pharmaniaga to continue to do so during what is labelled as the interim period.

“This is to ensure that there will be no disruption in procurement of drugs and medical supplies while we open tender and appoint a new concessionaire, ” he said.

He added that if a new concessionaire can be found before the 25 months are up, then the new company will take over from Pharmaniaga.

Dzulkefly said Pharmaniaga will, however, continue to handle distribution and logistics for the next five years.

On Oct 31, the minister announced that Pharmaniaga’s concession to distribute drugs and medical supplies for the Health Ministry will end.

Pharmaniaga has been the sole concessionaire providing these services.

The existence of a concession company was the result of the privatisation initiative undertaken by Tun Dr Mahathir Mohamad in 1994.

The privatisation involved the concessionaire taking over all the assets and manpower of the Government Medical Stores then under the ministry.

It was problematic at that time because the terms and conditions of the concession were quite loose and did not require enforcement of key performance indicators (KPIs) or include penalties for non-compliance. 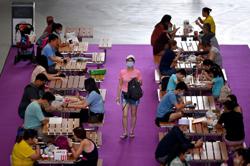