Tarek, a PSI co-founder, made the order after the company received a funds transfer of US$500mil (RM2.08bil) from 1Malaysia Development Bhd (1MDB).

According to the document, which was in the form of an email, Tarek ordered his staff to transfer 82mil Swiss francs to his personal account at RBS Coutts.

Shahrol, however, said he did not know about the transfer as he did not have access to the document.

The key witness, who was investigated for the 1MDB scandal, said he was only shown the financial transactions of Good Star Ltd (belonging to fugitive financier Low Taek Jho) and several other entities belonging to Aabar BVI throughout the investigation.

"I was never shown the finances of the joint venture company 1MDB-PSI because during the investigation I was only shown where the money went out.

"This includes a transfer of US$500mil on Sept 30,2009," he said, adding that until today he has never seen the JV company's bank statements.

The witness had earlier told the court that Low, or better known as Jho Low, ordered for a transfer of US$500mil from 1MDB to PSI to be done as soon as possible.

Datuk Seri Najib Razak, 66, faces 25 charges in total – four for abuse of power that allegedly brought him financial benefit to the tune of RM2.3bil; and 21 for money laundering involving the same amount of money. Najib's 1MDB trial postponed to May 19 due to parliamentary sitting 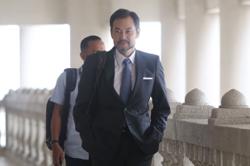