KUALA LUMPUR (Bernama): The High Court decided Wednesday (Nov 6) that Tian Chua's disqualification as a GE14 candidate is invalid and that the PKR vice-president is free to contest in future elections.

Justice Datuk Seri Mariana Yahya made the decision after allowing the originating summons by Tian Chua (real name Chua Tian Chang), the former Batu MP, as the plaintiff against the Election Commission (EC) as the sole defendant in the suit.

Mariana, in her judgement, agreed with the decisions made by the Kuala Lumpur and Shah Alam High Courts that the applicant (Tian Chua)'s eligibility and right to contest was not affected by a fine of RM2,000 imposed on him.

According to Mariana, an MP will only lose the right and eligibility to contest if the fine is RM2,001 and above.

Justice Mariana made the decision in her chambers Wednesday and the matter was confirmed by federal senior counsel Azizan Md Arshad, who acted for the EC.

Meanwhile, Tian Chua's lawyer Datuk Dr Gurdial Singh Nijar told reporters that the court allowed the summons by his client after finding the EC's decision to reject Tian Chua's nomination was invalid based on the earlier decisions of the High Court.

"The Court also decided it was unfair and unreasonable for EC to reject Tian Chua's nomination," he said.

Tian Chua, who is PKR vice-president, said his eligibility to contest in the GE14 should not have been denied by the EC and with the decision Wednesday, he has retained his status as a free man to contest.

In April 26, Tian Chua filed an originating summons to declare that he was an eligible person to contest in the general election and by-elections according to Article 48(1)(e) of the Federal Constitution.

He also sought a declaration that it was unfair to his eligibility and right to contest in any elections, Bernama reported.

During GE14 on April 28,2018, The Election Commission's election returning officer Anwar Md Zain had rejected Tian Chua's nomination for the Batu parliamentary seat on account of a RM2,000 fine imposed in a criminal case in 2017.

The sentence was in relation to his conviction for insulting the modesty of a police officer by using foul language, four years ago.

The decision to disqualify Chua was made according to Section 7(1)(c) of the Elections (Conduct of Elections) Regulations 1981, read together with Article 48(1)(e).

Anwar read the law which stated "not less than RM2,000" to mean Chua would only be qualified to contest should the fine be RM1,999.99 or less.

In contrast, the Shah Alam High Court which allowed Chua's appeal to reduce the fine from RM3,000 to RM2,000, explicitly spelt out that the MP would only be disqualified if "the fine was RM2,001 and above, and not from RM2,000".

Dewan Rakyat Speaker Tan Sri Pandikar Amin Mulia had in 2011 also ruled that Chua would remain as Batu MP and that the RM2,000 fine would not automatically remove him from his role as MP. 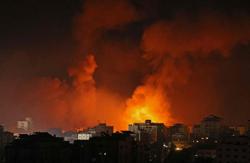