Bank Negara to get public feedback on cash transaction limit 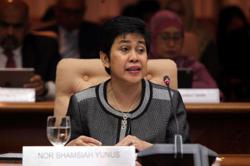 Its Governor Datuk Nor Shamsiah Mohd Yunus said that the regulatory and law enforcement community was in the midst of exploring a CTL to complement existing financial integrity measures.

She said that the public would be consulted on this proposal later this month by the National Coordination Committee to Counter Money Laundering (NCC).

"NCC wants to make an informed decision. As such, we hope that all of you could get the word out and encourage the public to provide feedback on the proposed measure," she said during her speech at the 11th International Conference on Financial Crime and Terrorism Financing 2019 (IFCTF 2019) on Tuesday (Nov 5).

Nor Shamsiah said the measure would address any abuse of the ease in conducting high-value cash transactions.

She said despite the rise of e-payment options, criminals still preferred cash because it was "widely accepted, anonymous in nature and untraceable".

Nor Shamsiah added that the measure is new to Malaysia but many other countries such as France, Italy and India had already implemented it.

She said that the number of CTRs received by Bank Negara had nearly doubled since the move, with five million received up to September.

The total value of the reported cash transactions has also increased marginally to RM483bil, she said.

"The significant increase in CTR received since January provides us important data points that enable more rigorous monitoring of peculiarities in cash transactions and identification of money laundering and terrorism financing (ML/TF) risk on newly-identified entities that have not been captured previously.

CTR is the report that financial institutions send to Bank Negara when the cash transactions exceed RM25,000. CTL is the limit of transactions set for the public and companies.

When cash is no longer king