However, the real fight for this parliamentary seat will be between Pakatan and Barisan.

It promises to be an interesting fight to test Pakatan’s popularity, especially after announcing the Budget 2020, and Barisan’s strength following the Umno-PAS pact.

Jeck Seng, 55, who recently got his Doctorate in Public Management from University Utara Malaysia, is no stranger to the local political scene as he was previously a two-term Tanjung Piai MP and one-term Pekan Nenas assemblyman. 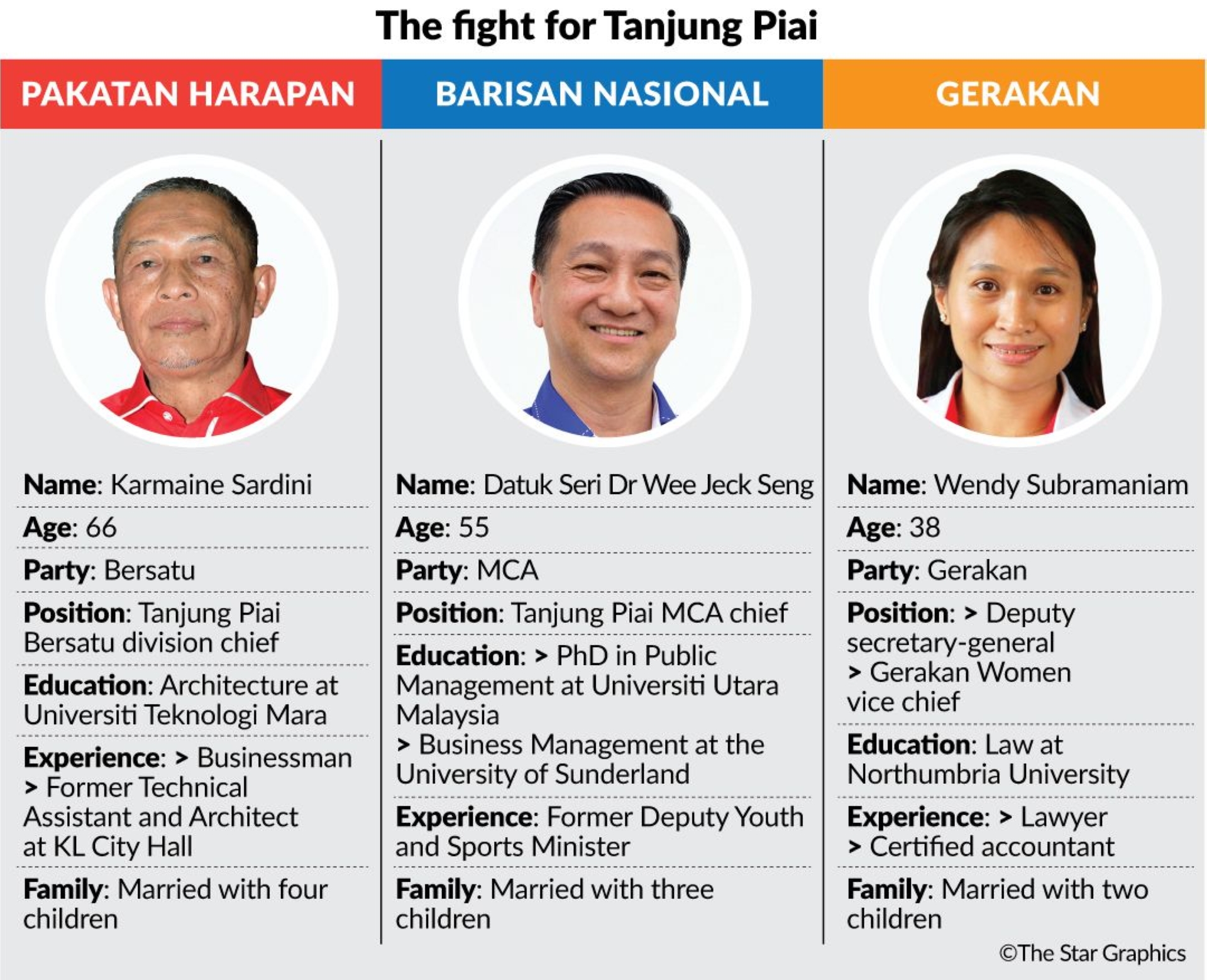 Hasni, who is also Barisan’s by-election director, described Jeck Seng as the best candidate for Barisan based on the consensus made within the coalition.

He said this proved the cooperation between Umno and PAS was inclusive, big-hearted and pragmatic in taking care of all societies and communities in the country.

“Jeck Seng also previously served the area as MP and assemblyman,” he said.

He was confident voters would use the by-election as a referendum to send a message to the ruling government that they were unhappy with their empty promises and lies.

MCA president Datuk Seri Dr Wee Ka Siong said he was confident that “Barisan machinery and our friends out there, in the name of national unity or the Opposition solidarity, will bring down Pakatan”.

“This (by-election) is an important test on whether Malaysians like or hate the government.

“They (Pakatan) put more than RM20mil in this by-election. They used to call it dedak (money politics), and now they say the RM20mil is a coincidence.

“On behalf of MCA, I want to thank Umno. This shows solidarity among us. Even though we lost the general election, the spirit of brotherhood is still strong,” said Ka Siong, who is also the Ayer Hitam MP.

‘’I know he is an approachable and caring leader who will cooperate with us to ensure victory. I am thankful to Umno president Datuk Seri Dr Ahmad Zahid Hamidi for his faith and mandate to put me on this fight.

“I also thank the party and

Dr Wee for this opportunity. We will fight on,’’ Jeck Seng said to thunderous applause and loud cheers from the crowd outside the premises.

The seat became vacant following the death of Dr Md Farid on Sept 21.

This semi-rural constituency is famous for tourism, small businesses and smallholders planting oil palm and pineapples.

The Election Commission has set Saturday as nomination day and Nov 16 as polling day.

Meanwhile, Gerakan said its participation in the by-election was to test the people’s support for the party after it left Barisan.

The by-election is also to test the strength of the party’s members, its machinery and preparation ahead of the next general election as well as to gauge the unity among its multiracial members.

Gerakan president Datuk Dr Dominic Lau said it would also be an eye-opener for the people to recognise and understand the party’s true mission and goals that had long been rooted in national politics.

“It will be a major challenge for the party as we are no longer part of the Barisan coalition,” he said in a statement.

On the other hand, Karmaine is seen as holding an advantage for the ruling coalition to garner the support of the local community.

Johor Amanah vice-chairman Suhaizan Kayat said Karmaine, who is from Pontian, would have an advantage as a local community leader.

“He is also a moderate, respected by the residents and I expect him to replace Dr Md Farid,” said Suhaizan who is the Johor State Legislative Assembly Speaker.