According to the regulation that came into effect last Saturday, drivers can now only chauffeur passengers at the new pick-up points that require a Touch ‘n Go with a minimum value of RM20 or pay-wave cards to access.

They are only allowed five minutes at the pick-up lanes or be made to pay a RM10 charge and an additional RM10 for a further five minutes. Each entry into the pick-up point at KLIA2 will cost RM5 effective Nov 1, to be collected by a company that is appointed to be the “queue manager” of the airport.

“It is almost impossible to complete a pick-up within five minutes. And it is totally unfair to burden drivers with these charges, ” said Malaysia E-hailing Drivers Association president Daryl Chong.

Explaining why five minutes was not enough, he said passengers often book a ride even before they step out of the arrival hall and some even while waiting for their baggage claim.

“Their walk to the new pick-up points may take up to 20 minutes. And for passengers who are not familiar with the vicinity around the airport, they will take even more time, ” he said.

Last Friday, Malaysia Airports Holdings Bhd (MAHB) said in a statement that the new pick-up points are at Doors 3 and 4, Level 1 of the Main Terminal Building of KLIA and at Door 5, Level 1 of the Transportation Hub at KLIA2.

Previously, e-hailing drivers could pick up passengers from outside the arrival halls of the respective airports, namely at KLIA’s arrival hall at Level 3 and Level 2 arrival hall of KLIA2.

MAHB chief executive officer Raja Azmi Raja Nazuddin said the move was to smoothen the constant traffic congestion at both airports as well as to ensure a more systematic public transportation flow.

Grab Malaysia, the largest e-hailing company, had also on Oct 10 issued a notification to its drivers informing them about the new pick-up points.

After five days into the implementation, Chong said many passengers were still caught off-guard with the new pick-up points and had to take a few minutes to walk there from the arrival floor.

“We understand MAHB wants a proper pick-up place for e-hailing services and they don’t want drivers to clog up the small area. We also understand the RM10 charge is a form of deterrent.

“But the allowed five-minute waiting time is too short and troubling drivers, ” he said, adding that MAHB should increase the waiting time to 15 minutes.

Chong also called on e-hailing companies to make the necessary changes to their app by only listing the allocated pick-up points for passengers to smoothen pick-up while booking a ride.

When contacted, the spokesperson of an e-hailing company who did not wish to be named said the unfair handling of e-hailing drivers with the regulations was totally uncalled for.

“Why are only the e-hailing drivers getting penalised for waiting and not the taxis and airport limousines, ” he asked.

A spokesperson from MAHB replied that e-hailing drivers were provided with a free waiting area outside, which is only five minutes away from the terminal.

“Drivers have to communicate with passengers and only then proceed to go pick them up when they are ready, ” she said. 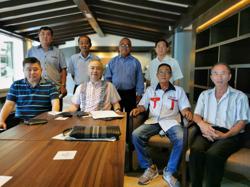