PETALING JAYA: A group of celebrities will be playing in a blind football match with the Harimau Buta national team tomorrow, all for a good cause.

The Eye On The Ball: Bola Buta Challenge by R.AGE and Star Media Group will kick off at 9am tomorrow with a celebrity exhibition match at the Bulan Sukan Negara festival outside Bukit Jalil Stadium.

The match, which is free for all members of the public to attend, will feature the likes of Bunkface, Ummi Nazeera, Harith Iskander, Jinnyboy, Marianne Tan and Kyoto Protocol.

And yes, they will all be playing blindfolded.

“We’ll be putting ourselves in someone else’s shoes and seeing what it’s like to not have the use of a very important sense. I’m not sure what I’m in for, but I hope to get a paradigm shift and gain some new points of view.”

The Bola Buta Challenge is being held in conjunction with Eye On The Ball, a cinema film produced by the award-winning R.AGE team and presented by Star Media Group and CIMB Foundation. It is set to be released in Malaysian cinemas this December.

Members of the public will also get to try blind football themselves after the celebrity match, from 10:30am to 6:00pm, with goodie bags and prizes from Starbucks and Inside Scoop up for grabs.

Suria FM announcer Halim Othman, best known for his iconic role as the host of Roda Impian, is also looking forward to doing his part to raise awareness as the emcee of the celebrity match.

“I would love to see everyone come and support this interesting event, and experience - however we can - how blind people live their lives, ” he said.

“I’ve always felt like the blind have a very unique perspective towards life - maybe we’ll discover something we’ve never thought of before!”

988 radio announcer Brandon Chew said he was looking forward to understanding how the blind can play a sport like football.

“I can’t even walk with my eyes closed, and yet these players can compete in football tournaments!” he said.

“This is very inspiring, and I can’t wait to meet them and understand the work they’re doing, and how their lives are.”

The Eye On The Ball film showcases the inspiring and dramatic story of the Harimau Buta’s unlikely quest to qualify for the World Cup of blind football. 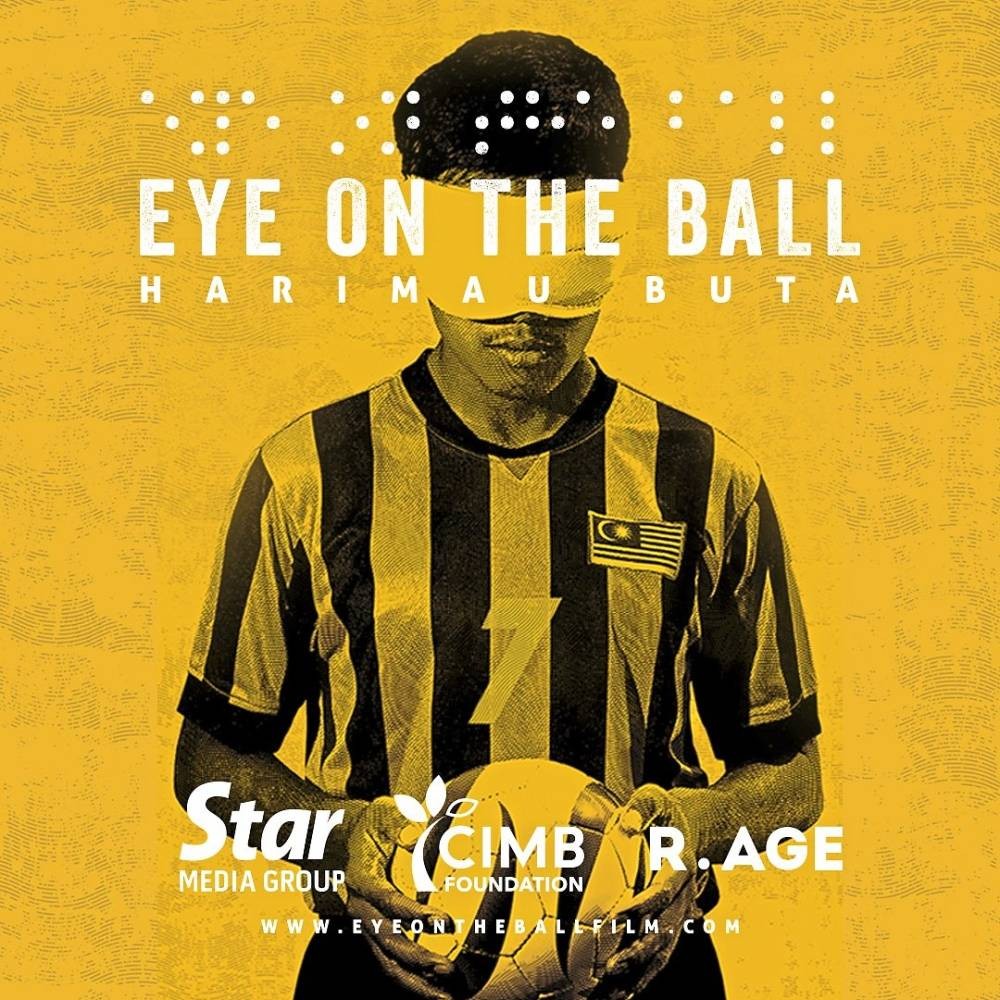 Directed by R.AGE senior producer and filmmaker Chen Yih Wen, the film aims to raise funds for blind football development in Malaysia and highlight the challenges faced by the visually-impaired in Malaysia.

Former national player Datuk Santokh Singh, who will participate in a blind penalty challenge, has called on the Malaysian public to also take part in the challenge as a form of support for the blind football team.

“Everybody should come out this Saturday and support the team. Even their cheers will lift the Harimau Buta’s spirits - it’s different from normal football, where the players can see their supporters. Here, our support needs to be heard, ” he said.

The Selangor FA football club will also send its youth team to support the event.

Former national player and Selangor U-21 head coach Gunalan Karupiah is looking forward to watching his “boys” try their sport from a different perspective.

“This will be a new experience for my boys, so I’m very excited. I’ve seen the blind football team play and it was very impressive, ” he said.

“To me, God has given us all a talent, it all depends on how we nurture it. The Malaysian blind team is very lucky to have Coach Sunny (Shalesh) to sharpen their talents, and I’m so proud that my boys and I will be part of this experience.”

Over 75 activities will be carried out throughout the day, including a carnival aimed at inspiring disabled Malaysians to be more active, zumba, and a taekwondo exhibition.

* Eye On The Ball is a campaign by Star Media Group, R.AGE and CIMB Foundation to support the Malaysian blind football community. Find out more at www.eyeontheballfilm.com.