Seven with ties to LTTE held

KUALA LUMPUR: A 28-year-old insurance agent who was allegedly planning to attack the Sri Lankan High Commission here in Malaysia was among seven arrested for links to the Liberation Tigers of Tamil Eelam (LTTE) militant group.

The arrests sent shockwaves through DAP because two of the party’s assemblymen from Negri Sembilan and Melaka were among those nabbed, while it is reliably learned that two more leaders from Penang, one of them a high-ranking state official, will be arrested today.

According to a source in George Town, the Penang assemblyman, who is also an executive councillor, is likely to be hauled up at his office in Komtar this morning while another lawmaker is expected to be arrested in Butterworth.

Meanwhile Penang Deputy Chief Minister II Dr P. Ramasamy, who had been investigated earlier for alleged links to the LTTE, said he did not know whether he would be arrested or not.

He added that the police had not been in touch with him since he was first questioned.

“I was cleared by the police last year after the questioning.

“I told them that I was involved in the peace process, and I was talking to both the LTTE and Sri Lankan government, which was my scope of responsibility, ” he added.

Ramasamy said he was involved with the peace process since 2005 when he was a lecturer with Universiti Kebangsaan Malaysia.

He was also part of a negotiation team established to find a peaceful solution to the conflict between the LTTE and the Sri Lankan government.

Meanwhile, speculation is that the second Penang leader who may be arrested is Bagan Dalam assemblyman Satees Muniandy, who said that he had also been questioned by the police several times over the LTTE.“I attended a war remembrance event for the victims of the Sri Lanka war in Butterworth in 2014, which was organised by a Tamil non-governmental organisation when I was a Seberang Prai councillor.

“I told the police that I was there on invitation as a mark of respect for the victims of the war and had no links with LTTE, ” he said.

Satees added that he never supported the LTTE but only sympathised with the victims.

“They have questioned me before and I have told them that. 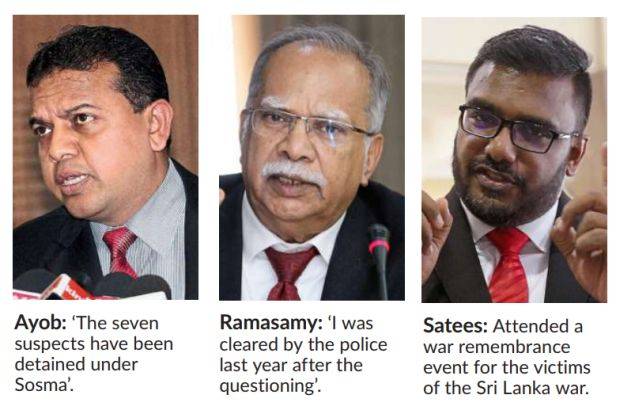 However, DAP secretary-general Lim Guan Eng reportedly said police informed him that while more people would be arrested, no more leaders or assemblymen from DAP would be targeted.

He said the party would provide a legal team to assist the two already arrested, to be led by Bukit Gelugor MP Ramkarpal Singh and Jelutong MP RSN Rayer.

“We have been monitoring the movements of the seven since November last year before we made the arrests, ” he told reporters at Bukit Aman here.

He said the assemblymen from Negri Sembilan and Melaka had attended an LTTE Warriors Day event in Melaka on Nov 28 last year.

“The two were believed to have been handing out pamphlets and other items linked to the LTTE.

“In Rawang we arrested a 28-year-old scrap metal dealer who is believed to have been the organiser of the LTTE Warriors Day event.

“He was also one of the individuals who attacked the Sri Lankan High Commissioner to Malaysia at the Kuala Lumpur International Airport on Sept 4,2016, ” he said.

“He was also involved in the attack on the high commissioner in 2016.

He said based on intelligence and investigations, police believed that there was a plan to revive the LTTE.

“We have been investigating them since November and we made the arrests as we have strong evidence.“For now, the seven suspects have been detained under the Security Offences (Special Measures) Act 2012 for 28 days for further investigations, ” he said, adding that they would continue to investigate the group and its supporters here and did not rule out further arrests in future.

When asked whether any politician from Penang was also on the police radar, DCP Ayob said police would take action against any individual involved in terrorist activities regardless of who they were.

He said he was aware of certain parties equating the acts of the LTTE in Sri Lanka to that of the Palestinians fighting for their homes, but they would continue to take action against anyone who was involved in such activities.

“I do not see this as a racist act. Why are certain people labelling us as racists now when we have steadily been taking action against all individuals linked to terrorist activities from all races and religions?” he said.

These Tigers are far from extinct

Melaka CM calm but others shocked by arrest