JOHOR BARU: Johor Umno is proposing Datuk Seri Hishammuddin Hussein to be appointed as the next Barisan Nasional secretary-general.

Johor Umno chief Datuk Hasni Mohamad said that the state was unanimous in its decision to put forward the Sembrong MP's name. 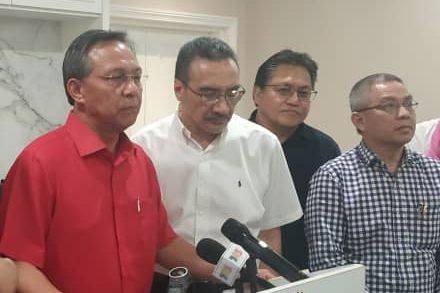 However, he explained that it was up to Barisan chairman Datuk Seri Dr Ahmad Zahid Hamidi to decide on the matter.

He added that the matter would be put forward at the upcoming Johor Umno convention on Oct 5.

Hasni also said that they also hoped to have a declaration on the Tanjung Piai by-election candidate during the one-day convention.

He said the candidate had yet to be decided but Barisan was confident of wresting control of the seat.

"We just to not want to win but to win big," he added after chairing the state Umno liason committee meeting here on Monday (Sept 30).

The Tanjung Piai parliamentary seat became vacant following the death of its incumbent, Datuk Dr Md Farid Md Rafik, who was Deputy Minister in the Prime Minister's Department. He passed away from a heart attack at Pontian Hospital on Sept 21.

Md Farid, 42, who was also Tanjung Piai Bersatu division vice-chief, won the seat in the last general election after beating Wee Jeck Seng and Nordin Othman with a majority of 524 votes.

The EC is expected to announce the date of the Tanjung Piai by-election after holding a special meeting on Tuesday.