GEORGE TOWN: In the biggest drug haul ever seen in Malaysia, police seized 12 tonnes of cocaine worth RM2.4bil here.

The cocaine, which was mixed with 60 tonnes of charcoal, is believed to be from an international drug syndicate using Penang as a transit point.

Inspector-General of Police Tan Sri Abdul Hamid Bador said this was the biggest haul in local history, which was a huge cause for concern.

"The operation was carried out under Ops Eagle which was launched on Sept 10 here.

"The drugs were found in three containers filled with 60 sacks of coal at the Butterworth port on Sept 10.

"The containers are believed to have arrived at the port on Aug 16. They used advanced technology to make sure the drugs cannot be detected.

"Even the canine unit could not detect the drugs.

"Normal drug detecting technology would not be able detect it. (But) our chemistry department has advanced technology that was able to detect the cocaine among the coal.

"The cocaine is valued at RM200,000 per kilo," he said at a press conference held at the Bayan Baru police station here.

IGP Abdul Hamid said a 29-year-old suspect believed to be in charge of arrangements (for the shipment) has been remanded for 14 days, which ends on Sept 23.

"The case is being investigated under section 39B Dangerous Drugs Act 1952, which carries the death penalty.

This drug bust surpassed the previous record on Aug 20 this year when police seized 500kg of ketamin and over 3.23 tonnes of cocaine worth over half a billion ringgit in Shah Alam. 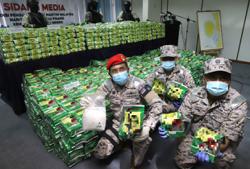