JOHOR BARU: Two robbers, linked to the botched armed robbery that killed an elderly woman in Kangkar Tebrau, were arrested along with a woman after a high-speed chase and a shootout.

Johor police chief Comm Datuk Mohd Kamaruddin Md Din said the suspects, aged 35 and 37, were arrested after they pulled off another armed robbery at a bank in Taman Molek, involving a male victim in his 30s on Saturday (Sept 14).

“Both suspects had stolen a black Perodua Myvi and RM150 in cash that belonged to the victim.

“Based on our intelligence, we managed to track down the suspects including a woman, 22, travelling in the stolen car at Pasir Gudang on Monday (Sept 16), ” he said at a press conference at the Seri Alam police headquarters on Tuesday (Sept 17).

Comm Mohd Kamaruddin added that the duo had acted dangerously after being approached by police and rammed the side of the police car.

“The driver had continued to ram the police car even after my men ordered them to stop.

“The patrol team was forced to act by shooting the right front tire of the Myvi, causing it to crash at the side of the road.

“One of the suspects then pointed a gun at my men and fired several shots, forcing the team to reply with a few shots to protect themselves, ” he said, adding that the shots hit both male suspects in their legs.

One of the robbers, however, managed to run away while the other male and female suspects were apprehended.

“‘Ops Kesan” was then immediately launched to track down the robber that fled. He was later apprehended at a house in Plentong at 12.10am on Tuesday.

The police also confiscated a revolver, one live bullet and the stolen car.

“We considered both suspects as ‘trigger happy’ based on their behaviour of shooting randomly.

“All three suspects also tested positive of methamphetamine. Both male suspects also had previous criminal records involving robbery, house break-ins, and drugs, ” he said, adding that initial investigations revealed that the female suspect had no connection with the robberies.

One of the male suspects was wanted for a robbery case at Bandar Seri Alam in 2007.

Comm Mohd Kamaruddin said the case was being investigated under Section 302 of the Penal Code for murder, as well as Sections 3 and 4 of the Firearms (Increased Penalties) Act 1971 for discharging and exhibiting a firearm in the commission of a scheduled offence.

On Friday (Sept 13), a 75-year-old woman was killed by a stray bullet fired by a robber at Jalan Tun Fatimah 2, Kangkar Tebrau.

The suspects had earlier broken into a house rented by six men, which was a short distance away from the woman's house.

The tenants of the house had, however, fought back and chased the robbers when one of them fired several shots.

One of the shots had hit one of the tenants, a 17-year-old teenager, in the leg while the last shot hit the woman on the right side of her head.

She died while receiving treatment at Sultanah Aminah Hospital here. 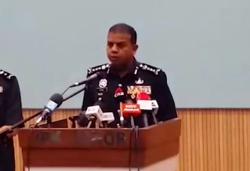 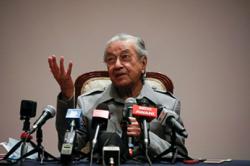